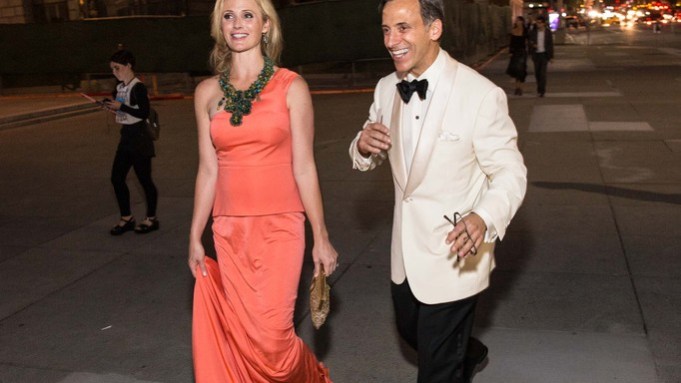 “It just arrived from Paris, and I did not have time to have it shortened,” said Pascarella, attempting to smooth her skirt.

Michael Tilson Thomas conducted “An American in Paris,” guests enjoyed a jazz age-inspired tented dinner and for everyone it was a mad dash to get it totally together at the Sept. 3 event after a summer spent lolling in the sun.

Well, not everyone was larking about. Marissa Mayer, a longtime supporter of San Francisco’s cultural life, swooped in late from Yahoo’s Sunnyvale headquarters, looking soigné.

“No, I did it myself,” Mayer said. “I once tried having a hairstylist along for the drive, for efficiency, but it just didn’t work. There are some areas where you can’t multitask.”

Post-dinner, Lexie Fisher found a handsome watch beneath the chair of a departed dinner guest.

“Oh, it must be Gordon Getty’s,” said Fisher, glancing at the name inscribed on the place card adjacent to the seat. “Oh, I live not far from the Gettys. I’ll get it back to him tomorrow.”

A check later with the music philanthropist confirmed that Getty had indeed lost his watch.
“Don’t worry,” he was consoled. “Lexie Fisher will return it tomorrow.”

On Sept. 6, the San Francisco Opera launched its lively season with a “Garden of Good and Evil”-themed dinner beneath the baroque city hall rotunda. It was decorated with looming birds by Colin Cowie, who recently opened an office in the city.

“Be sure to come to the after party,” said Cowie. “It’s going to be Sodom and Gomorrah.”

The evening’s theme was inspired by the slightly naughty new production of “Mefistofele”  featuring fortissimo singers, a crowded stage of writhing theatrical nudity and such diversions as jiggling body parts that had everyone peering into their opera glasses.

“Only four breasts and one penis were real,” whispered an opera insider who had attended the dress rehearsal.

“I had to move heaven and earth to get this,” she said. “After weeks of negotiation, it arrived with just two hours to spare. I’ve never been so pleased to see my FedEx guy.”