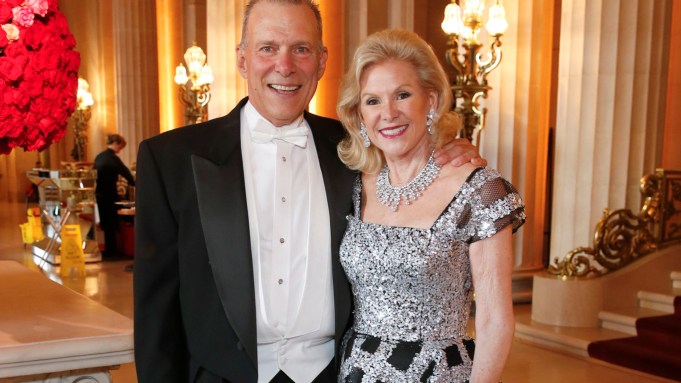 Summer idylls lingered on the minds of opera lovers who gathered in San Francisco Friday for a gilded gala to celebrate the opening night of San Francisco Opera’s 93rd season.

Dede Wilsey had just completed her classic grand summer tour, starting in Newport, with a stop at Lake Tahoe early August to view new Peter Copping designs at the annual Oscar de la Renta fashion show, and finally a relaxed month with children and grandchildren at her Napa Valley estate.

“I love the opera gala because it’s the perfect moment to catch up with old friends I haven’t seen for months,” said Wilsey, draped in a parure of Harry Winston diamonds.

Somehow Copping was a recurring theme. Boaz Mazur noted that that fifteen new gowns by Oscar de la Renta were in the house, and as well as the house’s classic gowns from previous seasons.

Venture capitalist Komal Shah and her family, bicycling through Normandy and Brittany in August, were invited to lunch at the designer’s country house.

“Peter cooked a wonderful vegetarian lunch for us, and his husband Rambert Rigaud arranged the most beautiful flowers from the garden,” said Shah. “It was like a dream and Peter is a charming and very relaxed host. I treasure the memory.”

Author Jennifer Raiser, in a shocking pink corseted number she had custom made in Mumbai last year, had a rather different experience. She had just returned from Burning Man.

“I was there, in the Nevada desert, for twenty-six days,” said Raiser, who is treasurer of the organization. “I think I showered four times. Water is not plentiful. Seventy thousand people turn up, and through the powdery, dusty air you might see Katy Perry or Suki Waterhouse, or Diddy or Karlie Kloss. It’s artists and musicians and creators and tech. And it’s the quickest trip to Mars you’ll ever take.”

Meanwhile, the natty Mazor, who travels with a full panoply of party-appropriate wardrobes, had arrived to escort Wilsey, sponsor of the opera’s opening weekend. He went classic in a superbly tailored double-breasted tuxedo jacket.

“Well, this is a gala and not formally a ball,” he mused. “So I chose plain lapels. Plain lapels are so chic, don’t you think?”

“It was one of the most beautiful productions I’ve seen, and so powerful,” said Wilsey as she headed to the after-party to dance the night away. She departed with Mazor as 2 a.m. approached.