Ringing in the Year of the Pig properly, Lilou the Pig, San Francisco’s official “therapy pig,” made an appearance, posing for photos in a sparkling bow and with hooves painted a lucky Chinese red. 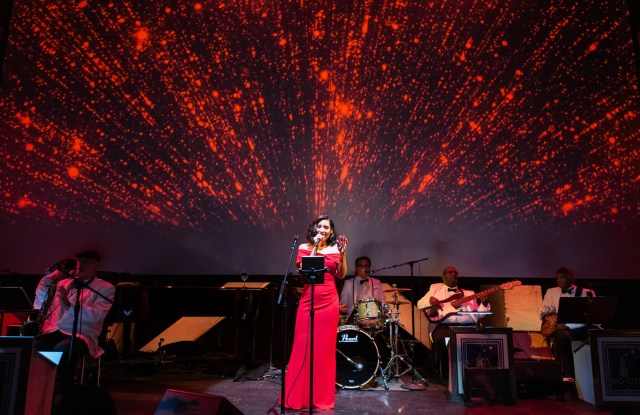 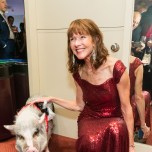 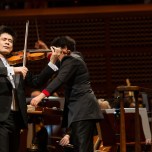 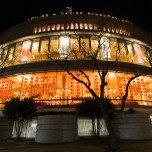 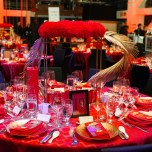 As legend has it: among the Chinese Zodiac’s 12 animals, the pig comes last because it was the final one to arrive to a party thrown by the Jade Emperor — lazy sauntering being a characteristic trait of the animal. The folktale was perhaps less fitting this past Saturday, as the San Francisco Symphony rang in the Year of the Pig on time and with a lively Chinese New Year Celebration event at Davies Symphony Hall in San Francisco. The annual gala featured a slate of concert performances led by conductor Mei-Ann Chen, followed by a postshow dinner.

But the evening began with a pre-reception of food, drink and festivities. Outside, lion dancers kicked off the celebration as red envelopes, a Chinese New Year staple, were handed out at the entrance. Attendees squeezed past one another in the packed main outer rim, where strings of large red paper lanterns hung from the hall’s panel of floor-to-ceiling windows. Members from the chamber ensemble Melody of China performed traditional Chinese folk music, while artists with the San Francisco Arts Commission wrote Chinese calligraphy on spring couplets for guests.

On the second floor, a young girl turned to her friend and exclaimed, “Oh my God! There’s an actual pig!” Ringing in the Year of the Pig properly, Lilou the Pig, San Francisco’s official “therapy pig,” made an appearance, posing for photos in a sparkling bow and with hooves painted a lucky Chinese red.

As night fell, the City Hall building across the street was lit up, in festive solidarity, with red and gold lighting.

Of course, the true celebration was in the music. The concert opened with a flourish as a dance ensemble from Loong Mah Sing See Wui, a San Francisco arts nonprofit, formed a procession through the aisles, carrying illuminated paper lanterns during the opening piece, a performance of David Byrne’s main title theme from the Chinese film “The Last Emperor.”

Other highlights of the concert included Chen Gang and He Zhanhao’s “The Butterfly Lovers Concerto” — a 1959 composition that was thrust into political resonance after facing censorship during China’s Cultural Revolution — during which renowned violinist Angelo Xiang Yu put on an impassioned performance that elicited a standing ovation. The show’s second half featured Red Chamber, a Canadian ensemble whose rapturous music made with traditional Chinese folk instruments earned its own rousing applause.

The night concluded with the dinner, where members of San Francisco’s high society mingled alongside former mayors Willie Brown and Frank Jordan. Singer Alisa Gasperi presented a bilingual performance of Chinese and English-language standards, while San Francisco Mayor London Breed spoke and thanked the night’s presenting sponsors, Gorretti and Lawrence Lui. Themed as “Diner en Rouge,” the dinner featured glittering set pieces in a room awash in strikingly red lighting — an elegant touch to cap off the night’s celebration of the year to come.

“From all of us at the San Francisco Symphony to all of you, we wish you a wonderful Year of the Boar,” said Chen, moments before the night’s final piece, “filled with much joy and happiness, great success and prosperity, and don’t forget — great music as well.”