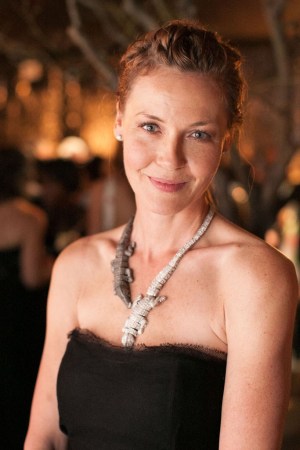 During the vodka-fueled cocktail hour, hosts Alexis Traina, Katie Traina and Vanessa Getty watched four expert skaters (found via Craigslist), who were costumed in Dutch master-inspired tweeds and mufflers, as they twirled around a 30-foot-diameter ice rink installed in the marquee.

This story first appeared in the March 12, 2013 issue of WWD. Subscribe Today.

“I was inspired by the Vermeer and Van Dyck paintings in the galleries to create a Dutch landscape draped in winter,” said Fulk, who also trucked in fake snow and dressed wait staff in fake chinchilla headgear. The frozen “pond” with a windmill as backdrop completed his chilled-out scenario. Trevor Traina recalled the first Mid-Winter Gala, held at the Legion of Honor museum, which he and Getty and friends dreamed up to support the city’s museums.

“We invited everyone we knew, brought in a top DJ from Los Angeles and had a blast,” said Traina as he chatted to guest Jony Ive, senior vice president of industrial design for Apple. Marissa Mayer, who recently completed her sixth month as chief of Yahoo, acknowledged that her recent recall of the company’s telecommuting staff to work at its Sunnyvale headquarters had sparked a near-worldwide conversation.

“We collect all the clips, but I have not had time to read them. I’m too busy,” said Mayer, whose son Macallister turns six months old later this month. Also going Dutch at the gala were Connie Nielsen, Stephanie Oshana with Tyler Mitchell, Kate Harbin, Alex Chases and Heather Ive. The event was expected to raise more than $600,000 for the museums.