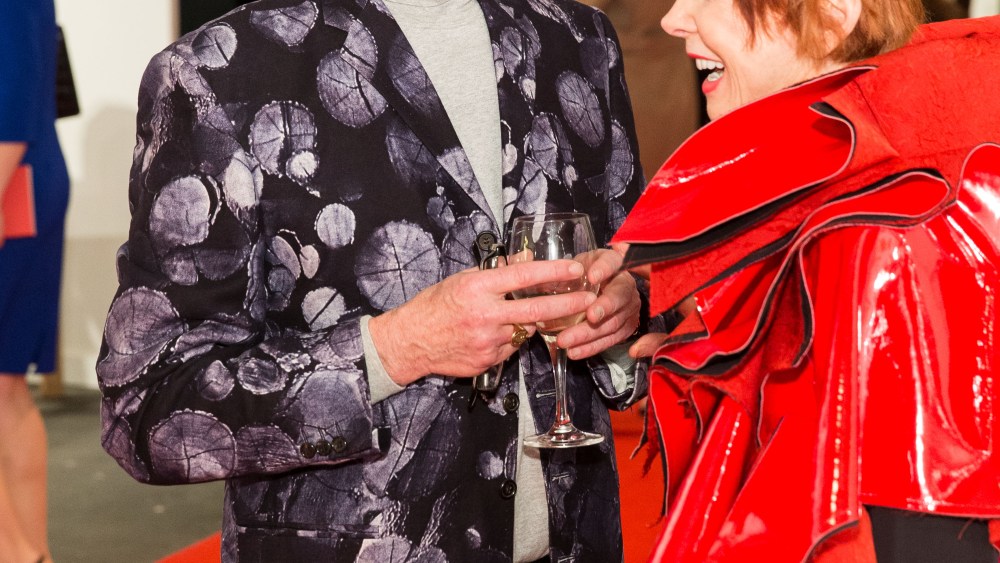 SAN FRANCISCO — While the City by the Bay boasts a handful of well-attended philanthropic functions, the relatively new FOG Design+Art — a weeklong fair of events — attracts one of the most diverse cross-sections of the tech-meets-art community.

The fair opened on Wednesday night with a preview gala to benefit the recently reopened San Francisco Museum of Modern Art with participation from 45 galleries from around the world and 2,000 attendees whose sartorial spectrum was as diverse as the art.

Venerable San Francisco event planner and fair cofounder Stanlee Gatti, whose installation of flower walls in the design of a Persian carpet blanketed Fort Mason in the scent of 100,000 roses, called it his “favorite event of the year.”

Gap Inc. board of directors chairman Bob Fisher, who is the president of the SFMoMA board of trustees, said that after four years, the event has gone from relative unknown to attracting some of the best art dealers and galleries in the world.

Fair steering committee member Douglas Durkin agreed. “We are a town of diversity and creativity. There is a lot of mystery in the art world; it can be a little intimidating, but we want to demystify it — and that philosophy fits San Francisco very well,” he said.

The venue also provided a number of Instagram-worthy moments, such as a colorful activation from costume designer Machine Dazzle, who created costumes at the event, and was sponsored by The Curran theater.

“It’s been cool to see it grow,” said Instagram cofounder Mike Krieger of the fair. Future Justice Fund founder Kaitlyn Krieger concurred, saying that the tech community’s involvement in the arts is still getting established here, but in the process, the FOG — named simply for San Francisco’s notorious climate — has quickly become a first-class art fair.