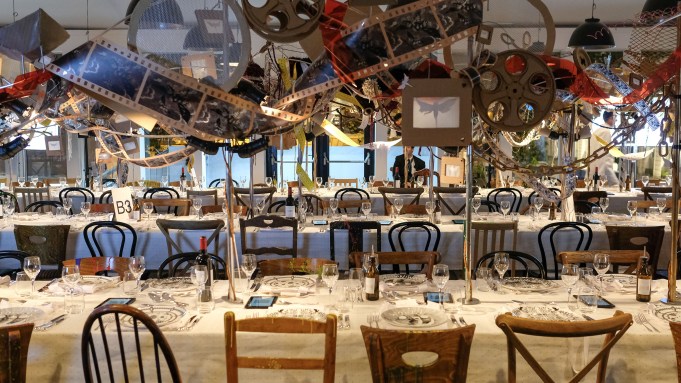 CRAFTY: The Sarabande Foundation, established from the estate of the late Lee Alexander McQueen, hosted a fund-raising gala called “Craftsmen’s Dinner” in Mayfair on Monday night, joined by the likes of Sarah Burton, Eddie and Hannah Redmayne, Nicholas Kirkwood, Rupert Friend and Stephen Jones, who turned out to support the foundation and its work in promoting contemporary craft in all its forms.

The dinner was held at the Berkeley Square pavilion of the LAPADA Art & Antiques Fair, of which Sarabande is the charitable partner this year, a partnership that held special meaning for Trino Verkade, founding trustee of Sarabande. She used to attend the fair with McQueen, who would often buy pieces of taxidermy or religious icons for his collection.

Sarabande, named after McQueen’s spring 2007 collection, provides scholarships to students at graduate and post-graduate level, selected by high-profile judges. Jake Chapman is choosing this year’s art recipient, while Kim Jones is selecting the fashion beneficiary. It also provides studio space at its headquarters for designers, artists, and jewelers.

As part of the LAPADA link-up, Sarabande was provided with the location for the gala event and a stand at the fair, which is showcasing the work of a number of artists and designers who have benefited from the foundation’s scholarships and subsidized studio program, including oil painters Jonah Pontzer and Michaela Yearwood-Dan; jeweler and Sarabande alumnus Benjamin Hawkins, who designed a silver moth pin which will be available to buy at LAPADA; taxidermy artist Harriet Horton, and silversmith Shinta Nakajima, who collaborated with Kirkwood on a pair of statement shoes with a spray of silver leaves at the heel that were auctioned off during the night’s proceedings.

Upstairs, the dining room had been transformed into a paean to craft, created under the direction of Sarabande sculptor and set designer Emma Witter, and Simon Kenny, founder of Souvenir, the company responsible for the sets of some of McQueen’s most memorable shows.

“Getting the design right for Trino was the hardest thing. I think there have been about 10 iterations,” said Kenny, adding that the whole set-up was completed in less than three hours that afternoon. “They were still serving lunch up there at 3 o’clock,” he explained.

A special menu was created by chef Mark Hix and served on long tables festooned with a riot of giant cardboard chain-link, and set with tablecloths printed to look like gridded pattern-making paper. The plates laid out for dinner were specifically designed by Jake Chapman, Francesca Amfitheatrof, Sir Ridley Scott and Sarah Burton for Alexander McQueen. The floor was covered with handmade rugs from The Rug Company, while embroidered table napkins from Sarabande also doubled up as aprons.