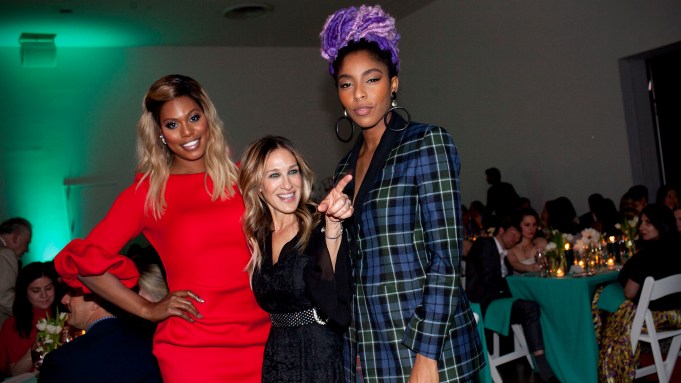 “Griswold v. Connecticut; do you know about that?”

“It’s the court decision that made contraception legal federally in 1965,” Cox continued. “Estelle Griswold was the director of Planned Parenthood in Connecticut, and contraception was illegal in Connecticut. I didn’t know this — but in this group, a lot of people might. I might mention it anyway — I haven’t solidified it. I’m working it through with you, if you don’t mind.”

“I’ve been a supporter of the vital work of Planned Parenthood for as long as I can remember; I’ve been pro-choice my whole life,” Cox said. “The long history of Planned Parenthood has been about women having control of our bodies. It just feels really special to be able to support this organization that has been under attack pretty much since its existence.”

The evening featured a live auction including a customized Audi R8 done by Marilyn Minter and her friend of 25 years, Depeche Mode’s Dave Gahan.

“His daughter is an intern at my studio. She painted all my trunk clasps,” Minter said of her friendship with the English rocker. “Dave’s an activist. Dave is a feminist — put that in there. He’s got a wife and a daughter. He’s English, and for them the idea of anybody fighting for reproductive rights is ludicrous.”

Richards was the star of the evening, earning a standing ovation for her walk both to and from the podium.

“Twelve years ago, I got this call and it was, ‘Would I come interview for the job at Planned Parenthood?’ And I was like, ‘Oh my God, I can’t do that,’” Richards told the audience in her speech. “And of course, like a lot of women, I had all these reasons — that I didn’t have the right skills, that my kids were too young…all the things that happen to us, all the time. I was about to cancel the interview so I did what any grown woman would do — I called my mother.”

Her mother, the late governor of Texas, Ann Richards, wasn’t letting her off the hook.

“She said ‘Cecile, get it together. You will never know unless you try.’ And she said ‘Planned Parenthood is the most important women’s health organization in the country.’ Like usual, of course, mom was right.”