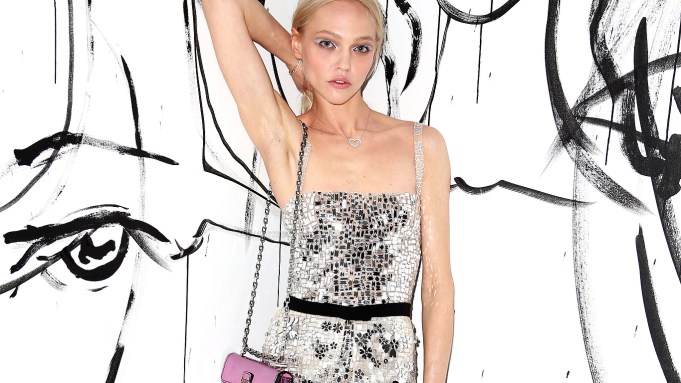 “I feel like it’s a birthday party,” exclaimed Sasha Pivovarova. “I’ve been an artist all my life, but nobody would come to celebrate. Finally, today people are coming.”

For nearly 15 years, the Russian-born Pivovarova has been known primarily for her looks, modeling for a bevy of high fashion brands, but all the while quietly expressing herself through her visual arts from painting to sculpture and collage. On Tuesday night, she was finally able to display her talents with an interactive installation of her work at a cocktail party celebrating the launch of Dior’s spring 2018 women’s ready-to-wear collection.

As guests including Sophie Auster, Olivia Culpo, Leigh Lezark, Mia Moretti and Johannes Huebl floated into the 14th Street Garage in Manhattan, they were greeted by Pivovarova’s multimedia installation of mostly hauntingly expressionless women. The exhibition also included a projected video of the artist on Monday afternoon painting similar faces in black ink onto a white cube constructed on an upper level of the space — the perfect spot for a social media photo op.

“I saw the video on the wall and I didn’t realized at first that Sasha did it [all],” remarked musician Jon Batiste, who wore a sleek black lambskin jacket from Dior Homme for the occasion. “My mind is blown.”

While some are excited for New York Fashion Week’s seemingly endless string of parties, Batiste asserted that he’s mostly interested in the clothes. “You get to see what somebody’s worked on for that entire year,” said Batiste, who is in the process of writing a musical and later this year will release an album with legendary producer “T Bone” Burnett. “The parties are cool, but I’m here for the fashion. The parties are just icing on the cake for me.”

Although the official start of New York Fashion Week is still two days off, Hailey Baldwin is already mapping out her plan for stamina. The 21-year-old model admitted she opts out of certain parties in an effort to maintain her health during the marathon week. “I take lots of vitamins and I try to sleep. Sometimes you have to sacrifice the parties for your sleep. I’d rather have a night at home than wake up sick the next day.”

Baldwin, who said she will be walking in a “couple of shows here and there” this season, gushed about Pivovarova’s installation and Dior artistic director Maria Grazia Chiuri’s latest collection, which was largely inspired by a series of photographs from the late artist Niki de Saint Phalle. “I’m blown away by all of it,” exclaimed Baldwin, who admitted to an “absurd” shoe collection with “lots of boots from Dior and too many sneakers.”

Having her art featured alongside Dior’s latest collection was particularly special for Pivovarova, who first modeled for the French company in 2005. “It’s a big emotional moment for me. I feel like I’m going to go back home, and I’ll draw all night because that’s how I need to express my emotion. You see I’m crying.”

In addition to providing art work for Tuesday’s party, Pivovarova — who is now based in the Hamptons with her husband and five-year-old daughter — both modeled and provided her art for the collection’s campaign and walked in Dior’s runway show in Paris in September.

“[Maria Grazia Chiuri] said this collection is about women’s creativity and basically I’m the bridge between art and fashion,” said the artist, who uses recycled materials including colored tape and plastic for her works. “Don’t get me wrong, I love the Old Masters, but my eyes are used to a TV screen. I was born in 1985. Our eyes got used to different things. I need change, movement, feelings, atmosphere — I need to enter the artist’s world. If I don’t feel it, it doesn’t work.”

While Pivovarova has not often shown her work publicly, this boost from Dior may encourage the former art history student to participate more frequently in gallery exhibitions. “I finally feel like a grown up artist. I’m young for an artist, but I feel very confident. You’re going to see more and more stuff coming out of me in the future.”