There was a pasties-clad Dita Von Teese in a martini glass hot tub, there was Future, Nicki Minaj and Teyana Taylor, there were cold foil-wrapped hamburgers on silver platters. 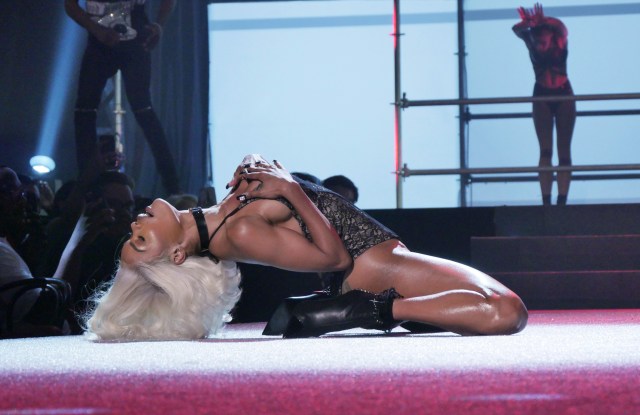 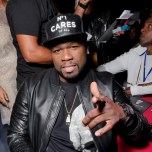 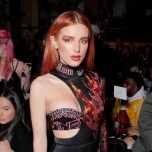 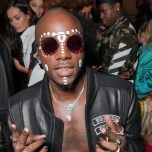 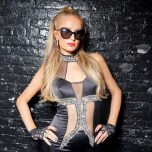 Though frantic, typically arrivals to a fashion show are not deemed dangerous; then again, few shows invite thousands of people to funnel through three metal detectors into the Hammerstein Ballroom, with equal hordes of security guards present.

The scene was, of course, Philipp Plein’s spring show, and before everyone got to experience Dita Von Teese’s pasties-clad onstage splash through a martini glass hot tub, or Future’s serenade to Teyana Taylor as she crawled down the runway in a lace thong bodysuit, they had to find their way through the mob scene outside the Midtown venue, which took nearly an hour.

There was the usual collection of editors, but also nearly 5,000 guests (at public relations’ estimation), dressed in everything from ski masks and fur to club-ready dresses that would look at home on the Vegas strip, and rhinestones — so many rhinestones.

Eager beavers began breaking through the barricades to sneak through the line, causing event organizers to shout for the help of security, citing the scene “dangerous.” Delightful.

Inside, however, bodyguards were almost as plentiful as guests, though the recognizable VIPs were few and far between. 50 Cent was there, as was Plein loyalist Paris Hilton; Bella Thorne made an appearance, along with Young Paris, EJ Johnson and Ne-Yo.

Nicki Minaj, fast on her way to being this season’s Ubiquitor, walked down the runway with security toward her seat, and proceeded to document the runway show through selfies, never tiring in finding her light. She would later perform at the after party, for those who were brave enough to wait it out.

Also there was Tiffany Trump, who made her New York Fashion Week debut earlier in the day at Taoray Wang. She sat with pal Andrew Warren. With her invite to Harper’s Bazaar’s Icons party perhaps lost in the mail, at least she could count on Plein for some front-row love.

“For our opening performance, the artist has requested no close-up photography,” it was announced shortly before Dita Von Teese pranced onto the stage, and shortly before a pair of glasses were shattered near the front row, the shards left untouched. Von Teese’s onstage romp preceded Future, who performed as models like 21 Savage and the Rae Sremmurd duo strutted.

After 11 p.m., a DJ pummeled music into the room and people climbed up to the runway, walking aimlessly about chatting on their phones, or pulling up a chair for a photo op, or sitting with eyes glued to their screens, likely Googling a map of the Hammerstein Ballroom for the nearest exit.

In his preshow remarks to the audience, Plein estimated there were 2,000 more people waiting outside the venue to get in, and one look at the swarms lined up on 34th Street indicated how accurate that estimation was. Though the burgers were cold and Minaj was once again fashionably late to the stage, the night was young for the Plein pack.