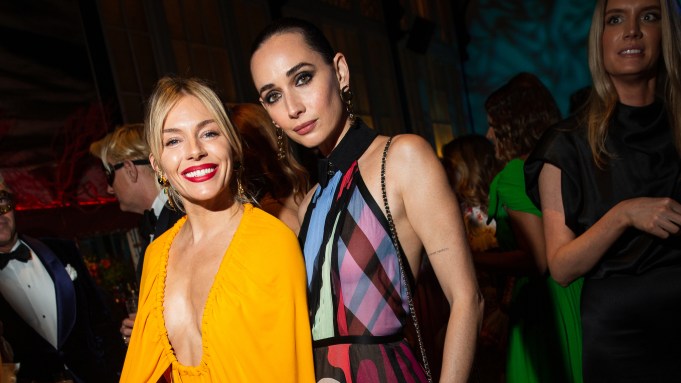 On Friday night in downtown Manhattan, over-the-top black-tie attire was back in action.

Save Venice was hosting its elegant “Un Ballo in Maschero” in-person for the first time since before the pandemic. In a nod to its return, masks were optional at this year’s masquerade, “in honor of being together again” in time to celebrate the organization’s 50th anniversary. The yearlong celebrations will conclude with an event this fall in Venice, timed to the conclusion of the soon-to-open Venice Biennale.

The evening’s theme was “enchantment by the sea,” and maritime motifs ran throughout the room at Cipriani South Street. Cocktail hour featured an oversized clamshell step-and-repeat, and many guests incorporated the theme into their outfits. One man had an oyster platter perched atop his top hat, Di Mondo donned a seashell collar and ruffled blue train that mimicked a wave, and entrepreneur Amy Griffin’s headband featured an octopus stretched across one ear.

“Although you can’t see the sea from this room, we are right next to the sea — or the Hudson,” said lead ball chair Lauren Santo Domingo before dinner. “It felt very Venetian.”

Santo Domingo was being honored at the event for her longtime involvement with the organization, which was founded in 1971 to preserve the artistic heritage of Venice. “I’ve been involved with Save Venice for as long as I’ve been in New York City,” she said. “My husband’s family has been involved with Save Venice for almost as long as it’s existed.”

The ballroom, decorated by Bronson van Wyck and Van Wyck & Van Wyck, was draped in blue and yellow fabric and featured blue-and-yellow striped poles, a nod both to the iconic gondolas in Venice and Ukraine. The dinner kicked off with a performance by the Ukrainian Chorus Dumka of New York.

“By being here, all of us acknowledge the fragility of artistic and cultural treasures — not just in Venice, but in the world over,” said Save Venice chairman Frederick Ilchman, adding that Friday’s event had raised more than $2.1 million. “You acknowledge our responsibility to ensure these wonders will be enjoyed by generations to come.”