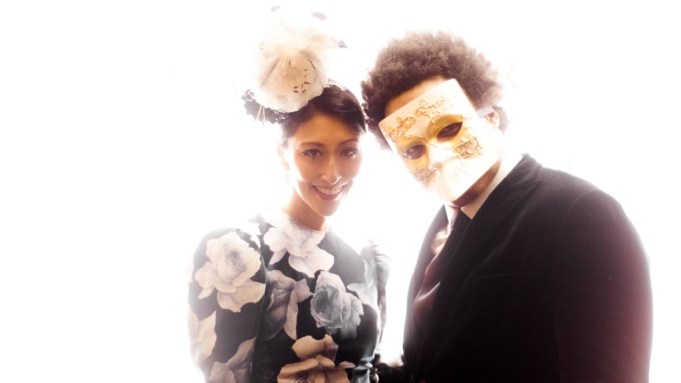 “Wearing a mask, there’s a kind of sexual tension,” said Di Mondo, who won best mask for his nightmarish luchador-style concoction at the Save Venice Masquerade Ball on Friday, the annual New York party to raise money for art and architecture restoration in Venice. “In my mask, I tried to represent the sexual repression from back in the old days.”

“It adds an air of mystery and an air of antiquity,” said Michelle Harper of the mask requirement. Harper wore a white Roberto Cavalli dress that she described as “kind of Eastery.”

“I love the creativity masks require from people,” Harper continued. “They can’t just throw on a gown. It really makes people more creative.”

Some guests, such as Prabal Gurung, opted to attend barefaced. “I decided to get rid of my mask and just be myself tonight,” he quipped.

Mannequins dressed to match the black-and-white theme of the party held signs directing guests through The Pierre hotel toward cocktails and the ballroom. Bouquets of white flowers adorned the bar as enormous crystal chandeliers hung over the mingling guests. Later, classical pianist Elew performed beside a silent bandstand of more couture-draped mannequins.

“We were inspired by Truman Capote’s black-and-white ball,” says Olivia Chantecaille, a vice chairman of the event. “It’s very iconic and we thought we could revive that in our day and age with an Italian flair.”

“I love a good black-and-white theme,” said Harry Brant. “Although I’m wearing a bit of a dark blue. I thought I could slide.”