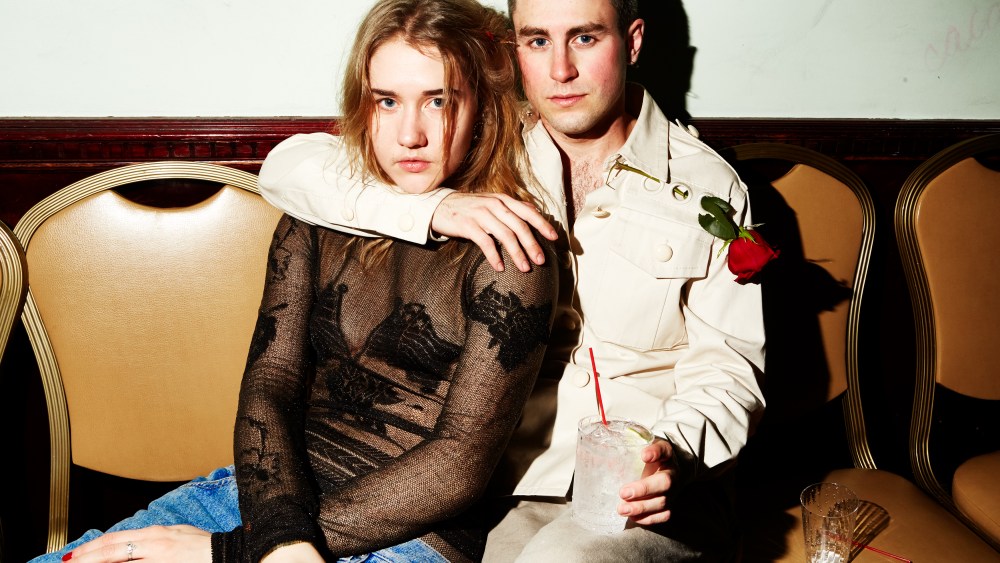 The 45th president has yet to take office, but downtown New York is already primed to rage against the Trump machine. In the fallout from the election, bands of liberal creatives — many of them prominent members of the fashion, art and music communities — have begun establishing parties, rallies and gatherings as safe venues to express their frustrations.

Fashion designers, gallerists, artists and writers — from Rob Pruitt and Nate Lowman to Tavi Gevinson and Stella Schnabel — have in the last few months attended SoHo protests, late-night dance parties and one-off dinners, with many such events benefiting charities that flout far-right values.

New York Democrats have found themselves in a frenzied state of discussion, commiseration and unbridled moments, their brooding initiating a larger shift in party culture. For the first time in a long while, there is more of a hankering to head to a bar after work, than to yoga or the gym.

It is something of an about-face from the recent health craze, in which tandem Class Pass bookings had become the new status quo happy hour. At a recent evening at Sophie’s bar on East Fifth Street, this renewed interest in buzzed chatter was evident — with the dive bar’s gruff patrons eager to share ideas, cliques be damned.

As such, New York has found itself in a moment of community that, only a few months ago, was mitigated by the small handheld devices in each participant’s pocket. A mélange of Instagram, Tinder and text had rendered individuals as social islands, and hindered the type of face-to-face discussion that has long sparked creativity and thought-provoking design.

In trading $10 juices for equally priced highball glasses of vodka — probing debates and creative exchanges are occurring at an accelerated rate. Such congenial behavior has also reverberated at key below-14th Street anti-Trump events, where iPhones took a back seat to personal interaction.

“I feel like I don’t want to use my phone, I don’t want to be promoting pictures of myself even though that’s what we have been taught,” filmmaker and shoe designer Arden Wohl said at the “Dear Ivanka” protest held in SoHo in November, a demonstration that gave an anti-Trump voice to the arts community. “It seems to me that social media is not the answer. Someone said to me, ‘I don’t think [the Internet] is the way to bring people together, we need to congregate in groups and physical spaces more collectively.’”

Leftist cultural institutions are looking to foster this type of constructive conversation, too, with the Whitney Museum saying last week that its entrance fees would be pay-as-you wish on Inauguration Day. “On Jan. 20, the Whitney will be open from 10:30 a.m. to 10 p.m. on a pay-what-you-wish basis to affirm our commitment to open dialogue, civic engagement and the diversity of American art and culture. Throughout the day, the museum will offer special programming, including ‘My America’ guided tours, exploring immigration, ethnicity, race and the complexity of American identity through the Whitney’s collection,” Kathryn Potts, associate director, Helena Rubinstein chair of education, said in a statement.

As reported by WWD in September, key members of the city’s cultural scene felt, preelection, that a Trump victory could elicit emotionally charged, visceral works from fashion designers and artists — yielding a counterculture period of creative enlightenment. Now that same group is coming to terms with what this could mean.

“Really good art comes out of anger and pain,” artist Marilyn Minter said at “Dear Ivanka.” “We will be the Tea Party on steroids,” she said of the creative class’ reaction to Trumpian ideology.

Trump’s win has driven these crowds to watering holes such as Dimes, Max Fish and China Chalet — places that, while culturally resonant before the election, have adopted a pseudo-political importance in its aftermath. They have become liberal clubhouses, to which below-Houston Street moppets — clad in high-waisted white denim, broad-shouldered overcoats and anxious strides — carry their political wounds for refuge.

New York may have overwhelmingly voted for Hillary Clinton (with 87.2 percent of Manhattan’s votes cast going her way), but the city’s nightlife scene has been left harried and divided. On a recent jaunt to Dorrian’s Red Hand on Second Avenue, WWD witnessed a blonde collegiate gyrating atop a table, with a ‘Make America Great Again’ hat atop her head — its fabric cast in white as an apparent show of feminism. The partisan sign drew snide remarks from her fellow Dewars-swilling patrons — nearly inciting a brawl.

Such potential run-ins have left New York’s dark hours in a state of uncertainty. For those in need of a fail-safe liberal experience — such as the many designers and artists involved in the progressive gender-fluidity movement — it is now up to community-builders such as David Moses and Dese Escobar to provide a nurturing environment in which to unfurl. 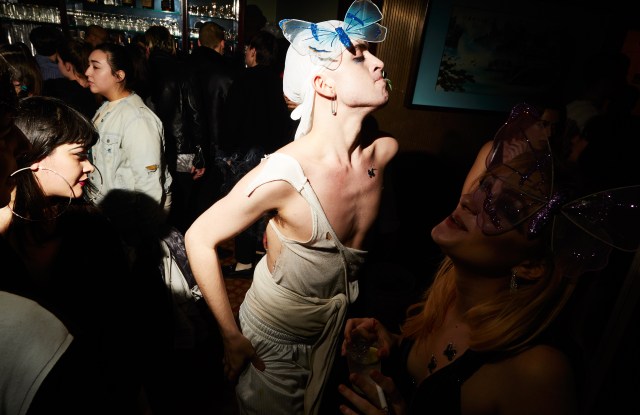 The duo — Moses of the fashion label Vaquera and Escobar, an artist — throw a politically tinged monthly party called Glam, at the makeshift boîte China Chalet. Since the Eighties the gilded, gaudy, multiroom Chinese restaurant — located above a TGI Friday’s in the Financial District — has served as a location for underground dance parties in the after-dinner-service hours.

Said Escobar of the event: “We have this space for people of color and queer people; it’s very necessary to have a space to come together. We can’t really go out to many places that make us feel welcome and comfortable.”

Held one Friday each month, Glam — like many parties at China Chalet — yields a hazy blowout, melding newly incepted elements of fashion, music and identity. While absolved of gender-related judgment, attendees are subject to ample sartorial scans. Such side-eye is par for the course, according to Moses, who said that: “Glam is as much about fashion as it is partying.”

Simultaneously sulking and ecstatic, revelers careened in and out of booths in the venue’s middle room — to dance in a humid and dark chamber overlooking Trinity Place. At the Glam event held three days after the election, excerpted audio from protests at Trump Tower were integrated into DJ sets.

Glam began its run in May, but, as Escobar said: “Ever since the election happened, we feel a responsibility to acknowledge it because we want people to stay aware while we are having a good time.” Thus a portion of proceeds from the parties is donated to charity — previously benefiting the White Helmets and the National Center for Transgender Equality. Moses and Escobar also circulate politically informed event flyers on Instagram in the party’s lead-up.

While Glam drew a boisterous crowd, a more subdued scene of artists, gallerists and cachet-inclined fashionistas convened on an evening in late November outside the Kushner Properties-owned Puck Building — at the intersection of Houston and Lafayette Streets — for a protest.

The peaceful display was organized by the self-proclaimed Halt Action Group, a collective of mostly anonymous art community kingpins. Curator Alison M. Gingeras and artist Jonathan Horowitz have identified themselves as key leaders in the movement. They created the Instagram account “Dear Ivanka” — a social media page that calls out various discrepancies by President-elect Trump in an attempt to draw the attention of his daughter. “She is the reasonable one — we feel she is the reasonable one and we are pleading with her,” Minter said of the evening’s purpose.

The demonstration was flush with highly aesthetic signs and placards — a curated version of the general populous’ assaults on Trump Tower. Wohl described the scene — attended by the likes of Bill Powers, Nate Lowman, Erin Goldberger and Sam McKinniss — as “political theater.”

In the weeks after the protest, the “Dear Ivanka” Instagram account drew more than 17,000 followers for its pointed messages and oft-unsettling images. It has also drawn hate mail from strident Trump supporters. A follow-up demonstration is to occur this afternoon at Trump Tower, where political hats will be handed out to passersby.

Its first outing appears to have resonated. Many of the artists who attended have created works purchased by Ivanka and her husband Jared Kushner. “Ivanka and Jared are interested in contemporary art — they want to show their sophistication by building a collection of noteworthy young artists. All of the people that hang on their walls are us and our friends. If we come forward and say, ‘We object to the hatred of your father and father-in-law,’ I think that will have an effect on Ivanka,” said Rob Pruitt.

Such sentiment was echoed last week when Richard Prince disavowed a painting he made in 2014, depicting Ivanka’s likeness as part of his hotly contested Instagram series — he labeled it “fake art.” Soon after, he returned $34,000 to an art adviser who had commissioned the piece — though it remains unclear if it had been commissioned for Ivanka’s collection specifically.

Allison Rodman, the communications director for the Gladstone Gallery, was among the dinner’s attendees. “I have consistently been looking for reasonable activist activities, and this was the perfect opportunity to bridge my social world with my politics,” she said.

Rodman, who also attended the “Dear Ivanka” protest, and — like many — will travel to Washington, D.C., for the Women’s March on Jan. 21, feels that joining in such gatherings “reminds us of the larger collective consciousness that could be absent should we choose not to partake in things.”

Moses — along with his Vaquera codesigners Patric DiCaprio, Bryn Taubensee and Claire Sully — will also attend the Women’s March. “I am almost a little worried about it, I worry what’s going to happen,” said Moses. “I’m interested to see what people are wearing there. I think people shouldn’t stop protesting, they should continue to fight what’s going on. It’s nerve-racking.”

Added Gingeras: “This is a great opportunity to build coalitions that perhaps complacency and status quo didn’t motivate us to do.”

Rodman concurred: “Art is a progressive force that reacts to any situation at hand, and New York is an enclave of liberal thinking and progressivism, but it’s too soon to know what will happen. Good art takes a long time.”