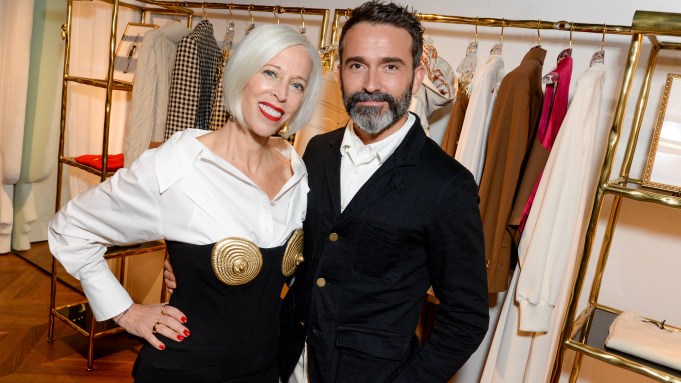 “We’re so used to this now — because how many breasts, legs and midriffs have we seen in the last month?” said the department store’s fashion director, who was donning a top from Schiaparelli’s current collection that featured “golden nipples” detailing. She’d drawn curious looks during an elevator ride with some men from a different building. Clearly, it wasn’t a crowd well-versed in fashion — creative director Daniel Roseberry’s designs for Schiaparelli have been a cultural staple this year, everywhere from Lady Gaga’s inauguration outfit to Bella Hadid’s Cannes look.

But inside Bergdorf’s Schiaparelli boutique, Fargo was in good company; many guests in the intimate crowd were donning similar golden pieces from the house’s ready-to-wear collection. The department store was hosting a cocktail and dinner to celebrate the boutique’s opening, Schiaparelli’s first permanent retail location outside of France since its 2012 relaunch under the ownership of Diego Della Valle. The partnership has been a long time in the making — seven or 90 years, depending on how you look at it. The department store carried the designer’s collection when the house first opened in the ’30s, and began the conversation to bring it back into the store shortly after its relaunch.

“We’re in a world where design — everything — starts getting a little homogeneous, and it takes a lot to catch your attention,” said Fargo, adding that Roseberry’s designs have shock value while also appealing to a wide range of customers. “When something is extraordinary and unique, the world responds. You don’t even need anyone to tell you very much about it. People feel it.”

Nearby, Adam Selman posed in front of a golden bust propped in a display shelf inside the entrance. Other guests including Julia Fox, Richie Shazam, Andre Walker, and Paloma Elsesser made their way around a giant golden tooth — also visible in the store’s window displays — and into the shop-in-shop, where Roseberry was holding court with the likes of Andrew Bolton.

“The space has been open now for three days and it’s been selling so beautifully,” said Roseberry, adding that he’s been heading up the launch effort for team Schiaparelli. (“All the Frenchies are trapped in Paris,” he said.) “It’s so encouraging to know that real people are putting real dollars buying these pieces, and that people are really gravitating towards the strongest pieces — the pieces that feel the most unique, the most Schiaparelli, the least middle of the road, the least generic.”

The brand has had a marquee year for red carpet dressing, making headlines most recently for dressing Cardi B for Paris Fashion Week look and Lady Gaga for the opening of the Academy Museum, not to mention cover placement on the October cover of Vogue, which featured Lorde.

“It’s felt like this crescendo,” said Roseberry of the past year. “Everything sort of started with Kim [Kardashian] in the green abs — the Hulk look that we did for her for Christmas — and then it was Gaga [at Biden’s inauguration],” he added. “My hope was that people who love the couture could come here and find pieces that feel so direct and so immediate, but also singular and so unique. I don’t want it to look like anybody else, and I don’t think that it does.”

More Party Coverage From the Eye: