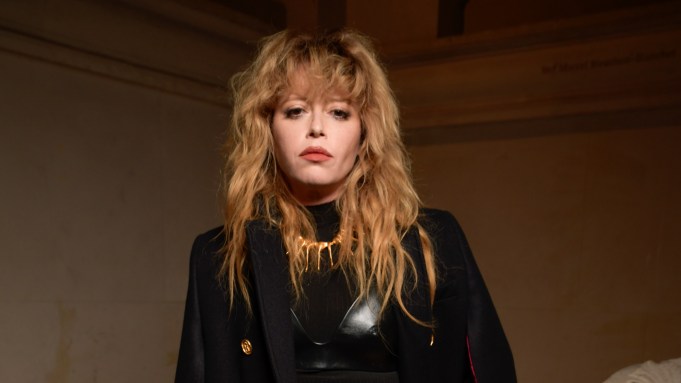 Daniel Roseberry’s Schiaparelli show officially opened Paris’ couture week with a jam-packed front row. Emma Watson and Natasha Lyonne met for the first time, while Rita Ora, Brazilian singer Anitta and K-pop star CL exchanged touring tips. With all the action, it was a tight squeeze between the seats and the elevated runway.

“It’s early, but we all showed up in our looks,” Ora said of the trio, divulging that she had just come over on the 6 a.m. Eurostar from London. “The things you do for fashion.”

Lyonne has been living it up all weekend with director Janicza Bravo in what the pair joked is their official red carpet debut.

“We have a whole life together that we’re working on,” said Lyonne of the trip, which has involved spas, swims and massages. “We’re sort of debuting as lovers properly right now, and we’re using Paris as our entrée to the month that we’re gonna spend in upstate New York,” added Bravo.

The two worked on a Miu Miu short film that premiered in March, and together will be shooting “Poker Face,” Rian Johnson’s upcoming detective drama, with Lyonne executive producing and Bravo directing.

In a chaotic circle of conversation, the duo ultimately described the show as part “Columbo” and part mystery-of-the-week with Lyonne as the lead. It won’t be their last public event though.

“You’ll see us a lot more, don’t worry about us,” joked Bravo, with Lyonne adding: “This is just part of an overall global world takeover that we’re planning.”

Watson returned to Paris Fashion Week after a few years following a chance meeting with Roseberry. “Funny story, I actually just strolled into the store one day not expecting to meet Daniel but he happened to be there,” she said.

They tried on clothes together and when he sent the invite, she asked if she could wear a jacket they had seen that day. “He just feels like a real human being, he’s just really understated and kind,” she said of why she connected with the designer — just before spotting the real star of the show.

“Sorry, I have to go see that dog,” she said as she dashed across the black velvet runway to pet a small white pup a guest had brought as their plus-one.

The trio of pop stars exchanged tour stories and tips. Anitta, who will be jetting from Paris to Poland only to return for Lollapalooza in a week, said “all the important stuff” comes with her after losing luggage one too many times.

Ora said it comes down to one major choice: “Do you eat or do you sleep? It’s like that, it’s hard, it’s hard,” she said of keeping up the pace. “It’s not like the ’70s anymore.

“I’m going to a premiere tomorrow with my boyfriend for his film,” she added, of hitting the red carpet for Taika Waititi’s “Thor: Love and Thunder.” Ora showed her seatmates pics of the outfit she has planned. But while she wouldn’t divulge if she will be wearing Schiaparelli, she said Roseberry’s designs “really connect with me and my vision.”

An always jubilant Jeremy O. Harris shared that he will be walking in his first Paris show later this week. “I’m all over, just poppin’ around. It’s my first time walking [couture] and I’m really excited,” said the American playwright. His preparation secret? “I’m going to a place called ‘Sweat Lab’ today that all the models told me they love.”

Karlie Kloss also divulged that she will be walking later this week. While the model/activist said the past week has been “tough” in light of the U.S. Supreme Court decisions, she said she is always happy to return to the runway.

“I keep a foot in both. My roots are in fashion and I grew up in this business and it will always be in my heart. Honestly, I just love being on the runway so when it makes sense I love to do it, but so much of what I spend my time on is Code with Klossy and making impact in any way I possibly can. And there’s a lot going on right now,” she said.

The model sported an oversized blazer and some ginormous gold earrings. “I have to admit they are heavy,” she said. “Beauty is pain, right? But they are worth it.”