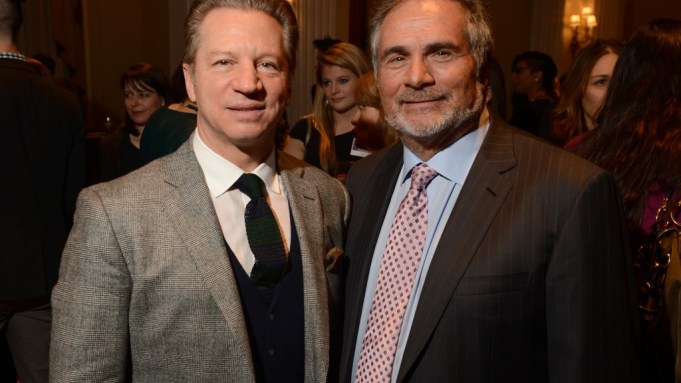 The YMA Fashion Scholarship Fund and the Geoffrey Beene Foundation got the new year off to a rousing start Wednesday night, raising a whopping $1.8 million at their annual fund-raising dinner at New York’s Waldorf-Astoria.

Mellon, who arrived at the dinner party as attendees were taking their seats, was accompanied by her daughter Minty and statuesque model Karlie Kloss, all of whom wore Mellon’s designs. In accepting her FSF Innovator award, Mellon told the students in attendance at the overflow event that they must always be willing to take risks, but not to expect to become an overnight success.

“Pay your dues and work for someone,” she said. “Take six or seven years to learn the business.” Her other two tidbits of advice were to “make sure you have a good finance director — but don’t let an accountant run your business.” And she said to always remember the “magic number: 51.” That the percentage of equity needed to always retain control.

Feldenkreis silenced the room with his story about how he escaped Fidel Castro’s reign in Cuba and managed to overcome adversity to find success in the U.S. He told the students to always work hard, never take no for an answer and always strive to be “the best or better than everyone else.”

Krauter, who resigned as senior vice president of Sears Holdings Corp. and president of Sears Apparel in November, said she is “just taking some time off and breathing.” But she didn’t rule out a return to the industry down the road. “It’s in my blood, it’s my passion. I’ve never not wanted to come to work in 35 years. I love being a merchant and you never know what doors will open.”

The program was moderated by Linda Fargo, senior vice president of the fashion office and store presentation for Bergdorf Goodman. She said that although she’s reticent to step into the spotlight, she made an exception for the YMA FSF. “It’s a really good cause and a good way to start the year and do something good for other people,” she said.