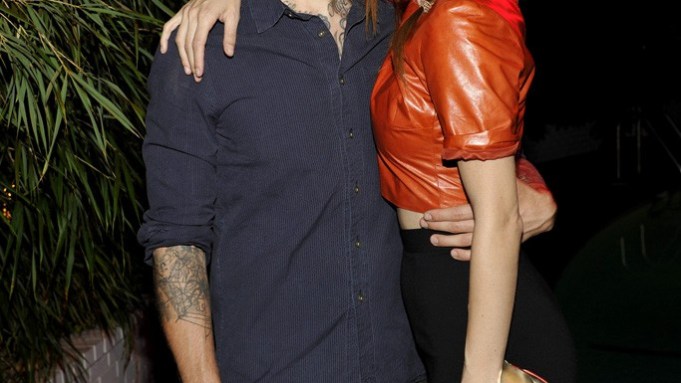 “Would you consider wearing a lab coat in the future?” the actress asked.

“I’m a T-shirt, jeans and baseball cap kind of guy, but it might be fun,” Brock said. “There’s a little chemistry to it.”

Campbell and Bell wed in June at a ceremony reportedly attended by Jennifer Aniston and Justin Theroux, Cameron Diaz, Lance Armstrong and Marc Jacobs. The couple was clearly still basking in newlywed bliss as they discussed the recent fruits of their partnership. Bell, who wrote, directed and stars in this month’s “In a World,” appears on the cover of this week’s New York Magazine wearing little more than a provocative expression and her husband’s ink.

“Everybody is really excited about it,” he added.

“My dad was less then excited about it,” Bell said.

“Lake’s dad had mixed feelings, but our friends are really into it,” Campbell explained. “I got a bit of feedback, like, ‘Dude, that’s your wife naked on the cover of New York Magazine,’ but then the part of me that was a 16-year-old fat kid in high school is like, ‘Yeah. Damn right that’s my wife naked on the cover.’”