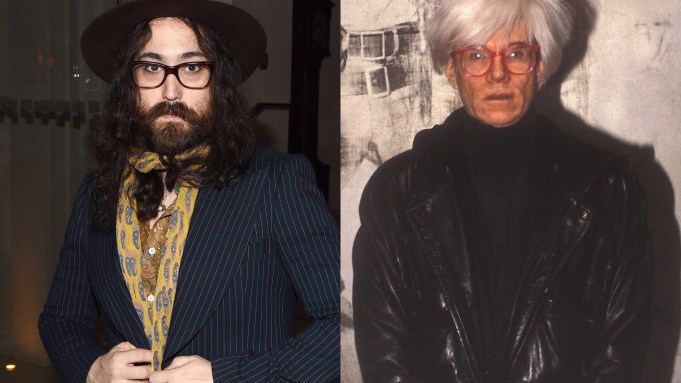 The New York Edition hotel’s lobby bar Monday was filled with the glamour of the disco era as luminaries in art, fashion, media and society gathered for a private cocktail party commemorating the 40th anniversary of Studio 54 and 30 years since Andy Warhol’s death.

“He was one of the parental figures in my life actually,” recalled Lennon of Warhol. “Having grown up without a father, I had Andy. His crew was sort of like my uncles.”

The son of John Lennon and Yoko Ono, now 41, was a child when his father was killed and grew up surrounded by his mother’s famous friends. “He always encouraged me to draw and would tell me to sign my drawings, which I found to be very odd because I didn’t even really know how to sign my name. He made me aware that there was this idea of celebrity culture and signing things.”

Visual artist Karen Bystedt floated through the room in a voluminous white gown adorned with photographs she took of Warhol when she was a 19-year-old student at New York University in the early Eighties. “I saw Andy in a GQ ad and I called Interview Magazine and he answered the phone,” explained Bystedt of her fortuitous introduction to Warhol.

The one-of-a-kind gown, which received an ample amount of foot traffic from unwitting cocktail waiters, featured several copies of Bystedt’s Warhol images that were embellished by singer Chris Brown. “Someone told me that Chris was an avid art lover and if I would be interested in having him paint on my photographs of Andy,” she added.

Fashion designer Sonia Ete constructed the dress and described Brown as having “a beautiful personality — very calm and very talented.”

Halston — born Roy Halston Frowick — was arguably the premier clothier for the Studio 54 set and his niece, Lesley Frowick, donned a disco-inspired chainmail dress from his 1983 collection for Monday night’s party. “It was like Studio 54 was his own made-to-order salon,” Frowick explained. “He and Andy Warhol went there to hustle their own work — Warhol with the portraiture and Halston with the clothing.”

But as the guests abandoned their Champagne flutes in favor of pending dinner reservations, it became evident that the passage of time had very much tamed the once lecherous and carousing regulars of the nightclub. “The glamour was so big,” noted Pat Cleveland.