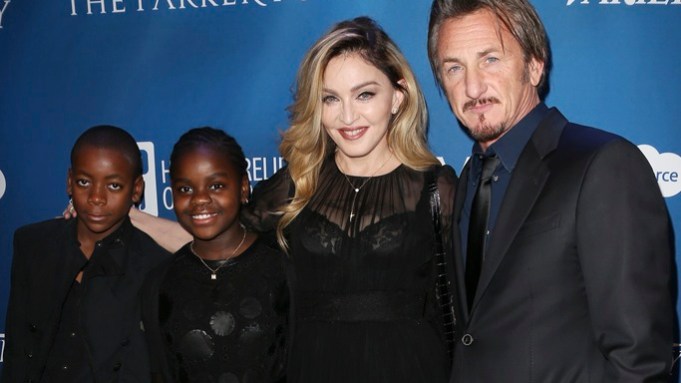 Despite both making headlines earlier in the day — Madonna for her contentious custody battle over son Rocco with ex Guy Ritchie; Penn for allegedly interviewing Mexican drug kingpin Joaquin “El Chapo” Guzman months before the mobster’s recapture — both kept the focus on the cause at hand of helping Haitians recover from the devastating earthquake six years ago.

After making an impassioned speech onstage, Penn wiped tears from his eyes and soon struck a lighter note. “I’m going to do something for the second time,” he said, dropping to one knee. “I’m going to say to an Italian chick from Michigan, ‘Will ya?'”

It was, of course, not a proposal but an invitation: Madonna left tablemates Bryan Lourd, Barry Diller and Leonardo DiCaprio to take the stage. “You’re a hard act to follow, baby, but I’m just the man for the job,” cooed Madonna, recalling a trip to Haiti with son Rocco and Penn in which she was struck both by the joy and beauty of the Haitian people and Penn’s accomplishments there.

“He’s a badass, and everywhere he went the crowds just parted,” said Madonna. “And it’s not because he’s a movie star; it’s not because he was carrying six guns; it’s because he put his heart and soul into this project…I want to say, Sean, that I love you, from the moment I laid eyes on you, and I still love you, just the same. I just wish you’d stop smoking so many cigarettes.”

The pop icon then launched into an a capella rendition of “La Vie en Rose,” strumming a ukulele in fingerless lace gloves and holding the audience’s rapt attention — so much so that barely anyone noticed Justin Bieber slipping in to join Emile Hirsch and Jason Segel’s table for the performance, then quietly slipping out again. “That was so nerve-wracking!” she exclaimed upon concluding. “I swear to God I’d rather play in front of 50,000 people!”

Penn pulled out all the stops for the charity event for J/P HRO — from a live auction that sold off everything from Madonna’s ukulele with a surprise hidden inside for $300,000 — “She’s got good secrets,” said Penn — to two of Bono’s “Irish Falcon” guitars — DiCaprio snagged one for himself — to guitar lessons from attendee Lars Ulrich of Metallica — to raise $7 million. As Tom Petty & the Heartbreakers closed out the night with a set of hits, Penn and Madonna embraced for a long time, whispering intimate goodbyes.