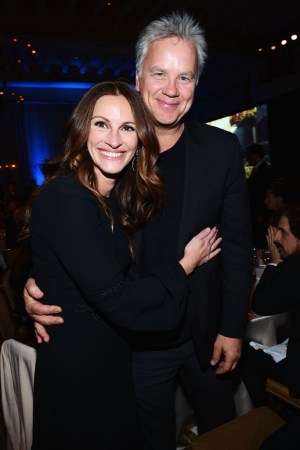 As the Second Annual Sean Penn & Friends Help Haiti Home event on Saturday proved, it helps to know people. The outspoken actor drew Richard Gere, Julia Roberts, Leonardo DiCaprio and Reese Witherspoon to the Montage Beverly Hills hotel to keep the spotlight on the country, still suffering in the wake of the 2010 earthquake, and raise over $4 million for his J/P Haitian Relief Organization.

“I promise you, I f–king promise, that we will make a difference in Haiti,” Penn said. “Don’t let the same five people do all the bidding.”

Cooper kept things moving along with a minimum of jokes (the comic relief was left to a video presentation by Ben Stiller), but he did lighten things up by dropping the F-bomb after Penn’s liberal use of the word.

“Sean is one of the best rabble rousers I know,” said Roberts. “His passion is truly infectious and I’d do anything to support him.” Roberts put her money where her mouth was during the live auction, bidding up the price on some high-ticket items eventually won by Barry Diller. DiCaprio and Witherspoon shelled out six figures for a day with Bill Clinton and an Armani runway show, respectively. Many others stood up in the crowd to pledge five, ten or one thousand dollars for medical care and rubble removal. Penn’s favorite musician, Eddie Vedder, ended the evening with some classic Pearl Jam hits and a rendition of Bruce Springsteen’s “Rise Up.” As the crowed retired to the lounge for the after party, Penn grinned as he said, “We’ll definitely do this again. There is a lot of work to be done this year, but we’ll start thinking about next year’s event tomorrow.”