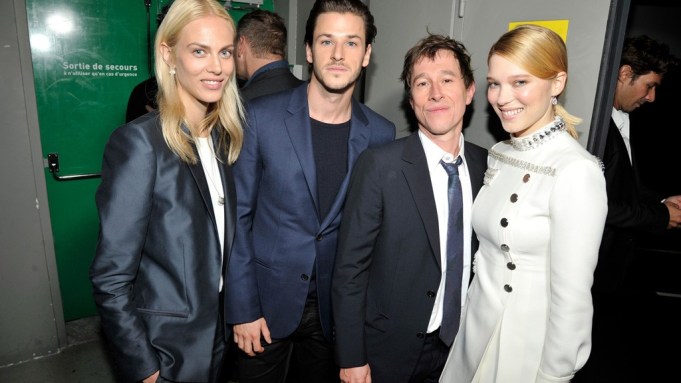 TEETHING TROUBLES: “Saint Laurent,” the second film this year based on the life of Yves Saint Laurent, premiered in Paris on Tuesday night, marking the end of a turbulent saga that has pitted director Bertrand Bonello and the producers of the film against the late couturier’s former partner Pierre Bergé.

“I’m not going to go into details, but it’s true that this film was difficult to make and I am therefore all the more proud to have succeeded and grateful to the people who helped to make it happen,” the controversial director told the audience.

Saint Laurent acolytes Catherine Deneuve and Betty Catroux stayed away, dashing hopes of a last-minute burying of the hatchet between the two camps, though Didier Grumbach, co-founder of Saint Laurent Rive Gauche, Saint Laurent’s ready-to-wear label launched in 1966, was among the guests.

Bonello and his cast — Gaspard Ulliel, Louis Garrel, Léa Seydoux, Amira Casar, Micha Lescot and Aymeline Valade among them — arrived late at the screening, having spent the early part of the evening holed up in a neighboring café.

In their absence, guests drank Champagne and sampled caviar in the basement of the museum, which is also hosting “Résonances,” an exhibition featuring extracts of Bonello’s previous films, ranging from pornographic scenes to footage of a stage performance by Ingrid Caven, rendered surreal by the absence of sound.

Not all guests had seen the first Saint Laurent film out of the gate, “Yves Saint Laurent,” directed by Jalil Lespert with Bergé’s blessing, but the competition between the two movies made for lively debate.

“I must admit I did not see the first one because it was commissioned,” said jewelry designer Yazbukey. “I already saw this one and I adore it, and I’m in love with Gaspard Ulliel, who is sublime in the role of Saint Laurent.”

Khelfa had seen Lespert’s film and was very curious to discover Bonello’s take on the couturier. “Saint Laurent has become a historical figure in France,” noted the model and actress, whose documentary on shoe designer Christian Louboutin will screen on Franco-German TV channel Arte on Saturday night.

Producer Eric Altmayer noted “Saint Laurent” had the crucial backing of François-Henri Pinault, chairman and chief executive officer of Kering, which owns Yves Saint Laurent. The film, which hits French cinemas today, has also been selected by the National Center for Cinema and the Moving Image as France’s entry for the Oscar for best foreign film.

Costume designer Anaïs Romand did not have access to the archives of the Fondation Pierre Bergé – Yves Saint Laurent, and Bergé even threatened legal action if any designs or sketches were reproduced without his permission. But Romand found a precious ally in designer Olivier Chatenet, co-founder of the label E2.

He loaned the production scores of items from his personal collection of 3,000 Saint Laurent outfits to dress actors and help recreate designs for the catwalk scenes.

“I had samples of prints they used in 1971, so we had them reproduced identically,” Chatenet explained. “Bertrand wasn’t trying to make a film about fashion, but to know that everything was taken care of, that it would be done as precisely as possible, I think was the biggest favor we could do for him.”

The film comes to the United States next week as part of the New York Film Festival.