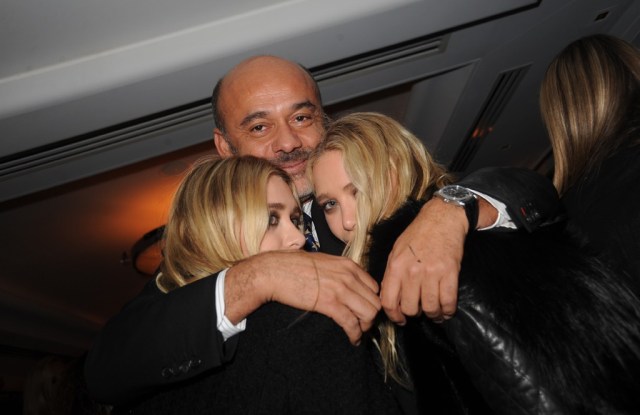 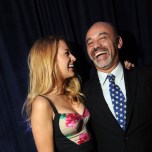 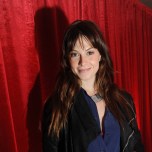 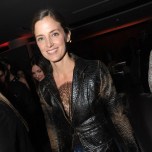 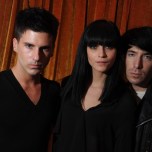 Leaning against the building’s facade in the manner made popular by outcast characters in John Hughes films, Ashley Olsen arched one studded-brogue clad foot (complete with red sole, of course), and sighed. “I had to wear flats tonight, I just couldn’t do it. I just told [Christian Louboutin], ‘I had to wear flats.’ He said he wouldn’t hold it against me.” Chow admired the aggressive spikes jutting out from the brogues. Mary-Kate nodded sympathetically of her own feet, encased in a pair of Louboutin leopard print shoeboots, “I feel pigeon-toed, slightly. But it’s worth it.”

Earlier in the evening notably well-heeled revelers had swirled through the fourth floor of Barneys to sip Champagne and pick up signed copies of Louboutin’s newest product: a Rizzoli tome just released in honor of the shoe maestro’s 20th anniversary.

Some dozens of guests then traipsed around the corner to Le Caprice for a more intimate dinner, which spread along a seemingly endless banquet table that divided the dark, lacquered restaurant in two.

Blake Lively arrived in a strobe of flashbulbs and very tight floral Dolce & Gabbana minidress. “Who doesn’t love Louboutins? Those red soles!” Lively squealed, beaming and playfully slapping at the designer’s open arms with both hands before wrapping him in an embrace.

“We just had a Halloween party for my daughter and 14 of her friends. Fifteen 9-year-olds,” Scott Schuman groaned of the past weekend’s festivities, indicating Garance Doré “hid for most of it. I think we’re happy to be at a grown-up party. Although there is considerably less candy.” Comestibles at Le Caprice came in the form of grilled halibut or the restaurant’s famed hamburger, which was nearly the size of some diners’ heads.

The Misshapes DJ’d the cocktail party at Barneys and spent a few minutes before the dinner began shuffling place cards around so as to be nearer to each other. “We kind of have the same bangs,” Leigh Lezark noted of Greg Krelenstein’s haircut, adjusting his fringe. “But you did it after mine.”

Jean Pigozzi sat on the same side of the table as Louboutin and was wearing a button-down shirt covered with cartoon lions, monkeys and bears under a hooded sweatshirt. This was fitting, as he freely discussed his collection of African art. “It’s the biggest in the world,” Pigozzi explained, “Without a doubt.” Later he reflected on New York’s art scene in the Seventies. “Oh, I knew those guys, Basquiat, Andy Warhol, I never knew what a genius he was. You couldn’t. We used to go to Studio 54 together. It was hard for him in the beginning. He used to hustle these little old Asian ladies around the Factory to buy his paintings for $5. They didn’t sell, really, most of them. And now…now! I remember once I came to the studio and saw him painting. He wrote about it in his book, it says, ‘I’m so happy Jean Pigozzi saw me paint.’”

What about the man of the hour? “Let’s ‘Paint the town red’?” Louboutin laughed of the trademark rouged soles of his wares, leaping up to greet a late-arriving Alicia Keys and Swizz Beatz. “Oh, I’ve heard that one before.”