The film’s star, David Oyelowo, set the tone for what is shaping up be a stylish 2015 awards season. 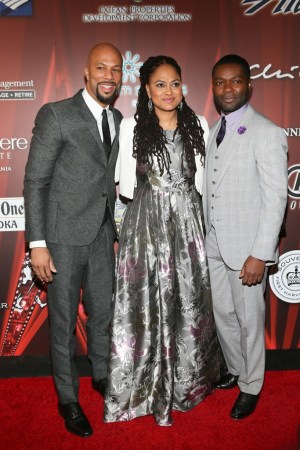 At Friday’s opening night premiere of “Selma” at the 26th Annual Palm Springs International Film Festival, the film’s star, David Oyelowo, set the tone for what is shaping up be a stylish 2015 awards season. From the purple “floral flair” on his lapel to the patent leather tips on his Louis Leeman loafers, Oyelowo didn’t miss a detail. “I like a lovely three-piece suit,” said the stylish Brit, who accented his grey Seize sur Vingt tailoring with a lavender shirt and plum tie. “They hooked me up good today,” he said, “But the shoes are what I’m really loving.” Common, in a Dsquared2 suit, sized up his co-star, saying, “He’s from England so he’s used to being sharp. He’s just a handsome gentleman.”

The two actors were among some 130,000 people who will attend the festival, which runs through Jan. 12, screening 192 films in five venues around the desert town (the venues include The Palm Springs Art Museum’s Annenberg Auditorium, Camelot Theatres, Palm Canyon Theatre, Regal Cinemas and Palm Springs High School auditorium, where “Selma” premiered.)

Rapper-turned-actor Common, whose real name is Lonnie Rashid Lynn, Jr., also raved about Oyelowo’s portrayal of Dr. Martin Luther King Jr. “I felt that he was carrying the spirit of what Dr. King is, every time he moved. I was like, ‘This dude is Dr. King,’” Lynn, Jr. said.

“Selma” is nominated for four Golden Globes, including Best Film, Best Actor for Oyelowo and Best Director for Ava DuVernay. “I’m just so glad that people are loving the film. All of the awards stuff is indicative of that, so yeah, just enjoying the ride,” said Oyelowo.

Virginia Madsen, in town to promote her role in quirky comedy “Walter,” said Palm Springs “has a special place in my heart” after “Sideways” screened at the festival in 2005. Madsen, who earned an Oscar nod for her role in that film, has advice for the “Selma” cast. “Enjoy the ride; just let it all roll around you like you’re on a carousel. It’s a once-in-a-lifetime experience.”