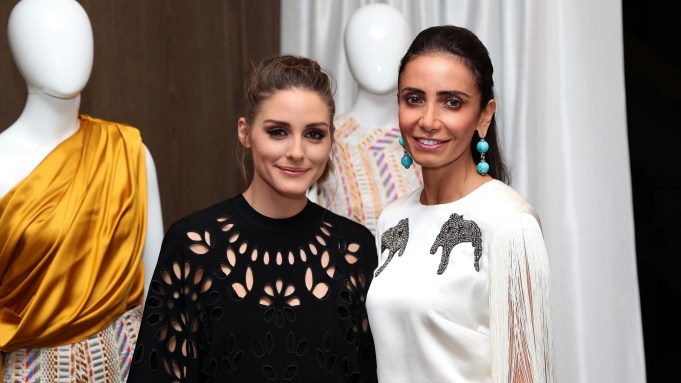 ABU DHABI — SemSem creative director Abeer Al Otaiba welcomed friends to a presentation and dinner over the weekend at the new Abu Dhabi Edition hotel to fete her spring 2019 collection.

The collection, inspired by nights out in the jungle, featured palm prints and sparkling leopard prints in a palette ranging from marigold to midnight blue punctuated with pleats and embellished fringe. Otaiba says the idea was to take her client “through an imaginary oasis, an escape from reality.”

That escape included a first look at the very latest Edition hotel, the fifth in the world, during its grand-opening weekend. The presentation was hosted in the hotel’s royal penthouse, followed by dinner on the Alba Terrace by Michelin star Chef Tom Aiken.

It was the first time the Washington, D.C.-based Otaiba, who is the wife of Yousef Al Otaiba, the Emirati Ambassador to the United States, was previewing the collection in Abu Dhabi. The Otaibas come to Abu Dhabi every year for the Grand Prix, bringing along with them a delegation of high-profile American businesses people and officials.

The busy mother of two and philanthropist created the brand to offer a collection of ready-to-wear, which mothers and daughters can coordinate. Sem Sem, a nickname for her daughter, donates a portion of the proceeds from all sales to charity. “I wanted my daughter to see that you can pick beautiful things to wear but also have an impact.”

Schwartz was beaming with pride for Otaiba as we looked at the collection. “It’s just fantastic. I remember when I was staying with her in Washington a few years ago, there were fabric swatches all over the house and she was in the early stages of creating. I’m just so thrilled to see how far she has come.”