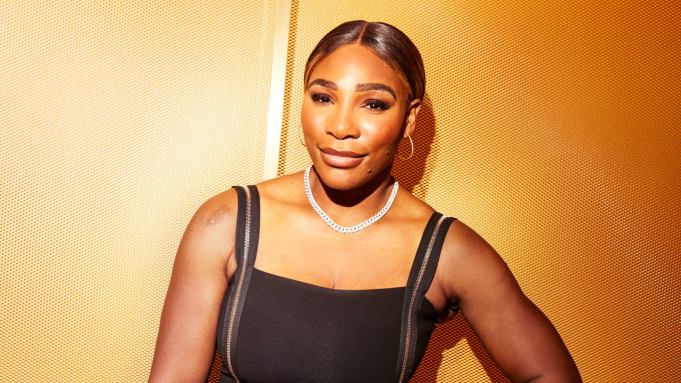 An understatement: September has been a busy month for Serena Williams. On Sept. 2, the athlete and entrepreneur played her final professional tennis match at the U.S. Open, officially retiring from the sport. She’s been on a celebratory lap around New York ever since. Last Thursday, she attended the New York launch party for Edward Enninful’s memoir with husband Alexis Ohanian; on Sunday, the couple was front row at a Pearl Jam concert at Madison Square Garden ahead of Williams’ Monday morning runway show for S by Serena. Later on Monday, Williams hit the Vogue World runway wearing Balenciaga.

Tuesday night brought her to the AP House to help Audemars Piguet celebrate the publication of “Royal Oak: From Iconoclast to Icon” in collaboration with Assouline.

“I just want to say you inspire us all,” said Audemars president of the Americas Ginny Wright, addressing Williams. “Not only are you the greatest of all time, you literally embody what this book is about, which is real iconoclast to icon. You changed everything,” Wright continued. “You inspire the whole world, little girls, everyone. You do so much — not only that, you’re an amazing mom, you’re an amazing wife. You’re an amazing friend, you’re a CEO, you’re a venture capitalist. You’re private equity. You’re a philanthropist. Fashion designer, jewelry designer. You do it all.”

Williams, looking humbled, took the microphone to address the intimate room of VIP collectors and share her appreciation for the luxury watch brand that she’s partnered with since 2014.

“I think there’s something wrong with your loaner watch,” said Wright, stepping in to unlatch the timepiece from Williams’ wrist. “I’m so sorry. I’m going to have to take that back — because this woman deserves the best.”

Williams looked stunned as Wright presented her with the Royal Oak “Jumbo” extra-thin “50th anniversary” watch, which was engraved on the back with “Serena Williams” and “GOAT.” It was the same watch that Williams wore for a recent photo shoot. “Better than my engagement ring!” Williams said as she accepted the gift.

Afterward, Williams was taking in the moment outside on the AP House terrace. “I was crying,” said Williams, AP watch on wrist (and Nike sneakers on feet). “No one makes me cry — I don’t cry happy tears.”

Williams had her sights set on AP when she was first looking to enter the luxury watch market almost a decade ago. “AP was always my favorite,” she said, adding that she was drawn to the diversity of the AP crowd; earlier, she’d spoken to the brand’s commitment to telling her story as a Black woman and athlete from the very beginning. “The AP brand is really about what I’m doing — it’s about making sure everyone has a seat at the table. If you look at the room, everyone’s here. That’s Serena,” she added.  (Well — everyone with the budget for a high-end watch, that is.)

Homing in on authenticity and inclusion is the focus of her business ventures outside of tennis; through her VC arm, Serena Ventures, Williams is putting her name and money behind founders focused on “everyday companies for everyday people.”

“We’re not catering only to the folks in New York and Miami and L.A. – we want to cater to what really affects everyday people,” she said. “We believe in founders and we invest in women and we invest in women of color. It’s really about looking at that round table and saying, who’s at the table, is everyone here? Is everyone represented here? And if the answer to that is yes, then we’ve done our job. And if the answer is no, then we need to look deeper and find the answer to that.”

It’s the same approach she’s taking in her fashion and jewelry line, S by Serena. Williams presented a shoppable edit of her favorite pieces on Monday morning on a pop-up tennis court on the rooftop at Spring Studios. Her favorite of the favorites included a one-shoulder lavender dress and a short jumpsuit — a “transitional” piece. “I live in Florida,” she added. “Sometimes when I’m designing, I design these selfish pieces. At the end of the day, this is what I like, because we don’t have seasons in Florida.”

Williams noted that the company is currently focused on customer acquisition and retention, designing for what her audience most wants to wear, too.

After leaving the AP House, Williams would continue her evening with a late-night show appearance and a front-row seat at Michael Kors beside New York City Mayor Eric Adams the following morning. After all that, she’s looking forward to enjoying a quieter moment back home in Miami. But she probably won’t stay still for long.

“Rest, relax, and letting it set in,” she said of her plans for the immediate future. “Like, OK, this is it — or is it? Am I gonna do a Tom Brady? I don’t know. It was pretty iconic what he did. So people should do that more often.”