The film screened at the TriBeCa Grand Hotel on Thursday night. 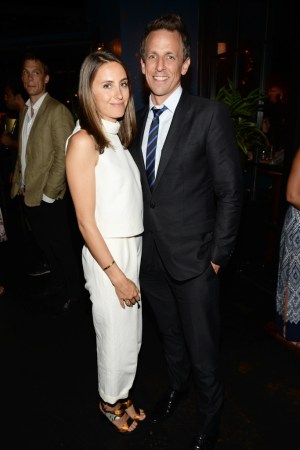 “Cartel Land” has been a heavy-hitter out of the gate. The documentary, on the subject of Mexican drug cartels, premiered at the Sundance Film Festival earlier this year to accolades, including a directing award and special jury award, and has since garnered strong reviews. On Thursday night, conservative pundit Ann Coulter was raving about it. “Oh my gosh! That movie is incredible!” she gushed after a Cinema Society-hosted screening of the film at the TriBeCa Grand Hotel. The film had also brought out director Matthew Heineman, Seth and Alexi Meyers, Gilles Mendel, Katie Couric, Jennifer Morrison, and Pat Cleveland.

The power of “Cartel Land” hinges on its access — the film opens with footage of an interview with Mexican cartel members cooking methamphetamine in the dead of night, and descends deeper into the workings of a vigilante group that rises to combat the growing violence that the cartels bring with them.

“The suffering in Mexico is unbearable,” a soft-spoken Heineman told WWD. “I think a lot of Americans don’t really realize that there’s a war that’s happening down there, and we’re connected to that war. We’re consuming the drugs that are the basis for that war, the basis for that violence.”

While Heineman follows two vigilante leaders on shoot-outs and into torture centers in Mexico, after the screening he was in the safer territory of a boutique hotel.

Meyers, who first viewed the film at the TriBeCa Film Festival, hosted Thursday’s screening. He was leaving on vacation to Italy the next day, and noted that he’d previously paid a visit to Mexico.

“I will say that based on this film Matt [Heineman] and I have had two very different experiences with Mexico,” Meyers said. “Mine would not make a very good documentary. Mine would make for a good teen film.”