Diane von Furstenberg was honored for her achievements and philanthropic efforts by the Museum of Jewish Heritage Tuesday night.

By Rosemary Feitelberg on May 11, 2016
View Slideshow 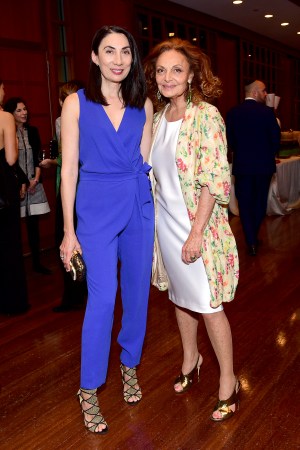 As the sun set Tuesday night on the Hudson River with the Statue of Liberty in the distance, Diane von Furstenberg was honored by the Museum of Jewish Heritage for her numerous accomplishments and philanthropic efforts.

Guests like Sheila Nevins, Seth Myers, Gad Elmaleh, Annette de la Renta, Robert M. Morgenthau, Abraham Foxman, Andy Cohen, Wendi Deng, Anh Duong, Paola Riva, Martin Miller and Hamilton South offered their support. The tribute included a performance by Bill T. Jones and the Arnie Zane Company. Jones, a choreographer and performer in his own right, created the piece specifically for von Furstenberg and sang during some of it. Earlier he marched around with a bullhorn to rally attendees at the 20th annual Heritage Dinner into the auditorium.

Gloria Vanderbilt couldn’t make it to the event, but her cochair Nevins recalled meeting von Furstenberg decades before she ever joined HBO. “I was working at CBS and I’d never been out with a camera crew before. Don Hewitt said, ‘Who wants to do the von Furstenberg wrap dress?’ I didn’t know what it was. I said, ‘I’ll go.’ He said, ‘Do you know how to shoot?’ and I said, ‘I’ll learn.’” Nevins said. “So I went out and that’s’ how I did it. I went to her house on Park Avenue. She had two small children. Then I went to her house in Connecticut. That was the first piece I did in my whole career.’”

After accepting a framed photograph of her mother Liliane Nahmias, von Furstenberg described how she survived despite weighing only 49 pounds. Noting how a doctor had told her mother that she could not have a child for at least five years, because she “would not make it and the child would not be normal,” von Furstenberg said, “Well, a few months later I was born and I was not normal.”

The designer continued, “My mother told me, ‘God saved me so that I can give you life. By giving you life, you gave me my life back. You are my torch of freedom.’ So this is what I was born with a torch of freedom in my hands.”

Walking through the museum’s “Stitching History From the Holocaust” exhibition earlier, von Furstenberg said she used to ask her mother how she survived. “She told me, ‘You know, it’s like when it’s raining. I go between the raindrops.’”

Emceeing, Cohen also referenced von Furstenberg’s family history. “Some of the most moving passages in her last book, ‘The Woman I Wanted to Be’ involve how her mother, a Holocaust survivor, shaped her outlook on life.” he said. “…DVF is not only the woman she wanted to be but millions of other women want to be her, too. She’s the woman I want to be, as a matter of fact. I aspire to that.”

Elmaleh, a well-known comedian in Europe who is now making his way at Joe’s Pub, also helped loosen up the crowd by describing how he met the designer. Stranded all night on an Air France flight that never left the tarmac, they struck up a conversation that led to friendship and subsequently his first U.S. TV appearance on Meyers’ late night talk show. “Normally we wait for a more private environment to say personal things about a friend but for Diane it’s different. Everything is different for Diane because she doesn’t allow you to compliment her in private. It’s impossible so I’m happy to do it in public. There’s nothing you can do Diane – I have the stage. There’s nothing you can do.”