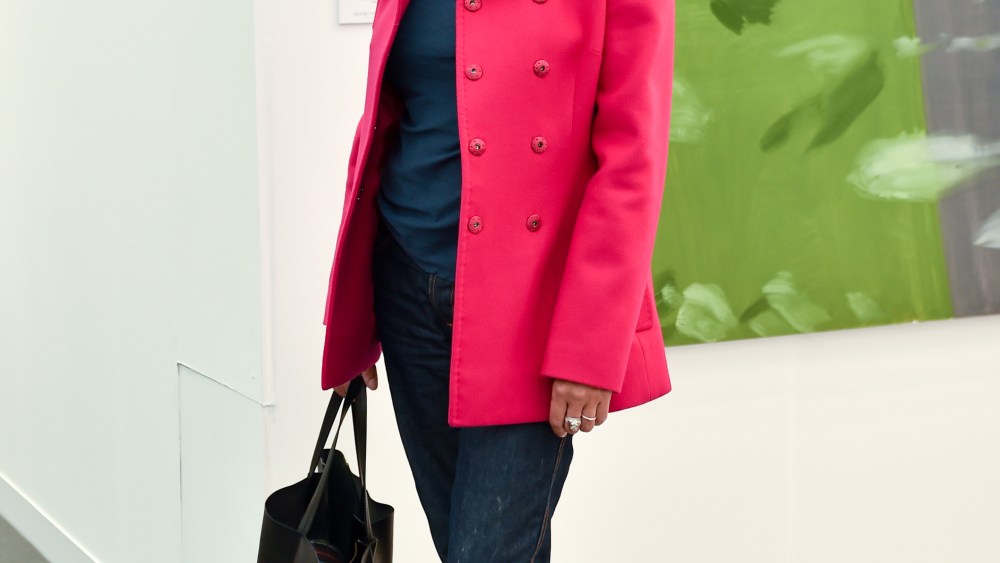 At the VIP preview Frieze Art Fair in London this week, she was spotted hanging around the Lehmann Maupin Gallery stand where a couple of her works were on display, including a provocative image of a nude woman embroidered with black silk on paper.

The work is called “Distant Memory.”

“It’s a big, giant penis outside a vagina,” said Emin, adding that she hasn’t had conventional sex for the past six years. “So the title is a clue as to what this is all about.”

The 12th edition of Frieze Art kicked off Wednesday with 164 galleries from 27 countries, with highlights including work by Camille Henrot at Galerie Kamel Mennour in Paris; Chris Martin at Anton Kern Gallery in New York; and Ken Okiishi at Pilar Corrias in London.

During the preview, the London-based jeweler Lara Bohinc spotted a couple of standouts while making the rounds. “I fell in love with a painting by Peter Halley and a piece by the Irwin Group from a gallery in Ljubljana.”

Gucci marked the opening of Frieze Masters, which also takes place in Regent’s Park and includes pre-20th century art from more than 130 galleries, including bronze sculptures by Barbara Hepworth and Henry Moore.

It was Natalya Poniatowski, founder of the New York-based fashion incubator LuxCartel, who introduced the two names more than a year ago. For the collaboration, the Tapisserie artisans took care of the embroideries, while Masterpeace’s team did the glass and semiprecious stone trims.

“We took patterns from Russian arts and crafts as inspiration,” said Evgenia Linovich, the founder of Masterpeace. “We looked at patterns found on ceramics, matryoshka dolls and traditional Russian folk scarves.”

The Fan clutch features a rose motif in black and red inspired by a 19th-century style Russian shawl; the blue-and-white Lucinda clutch has a folksy pattern inspired by a 14th century ceramic illustration; the dainty Amalfi bag has a vibrant floral motif that echoes traditional wood painting; and the green and yellow Hilda bag shows a traditional Russian sunflower motif and has an embellished handle featuring raw amber and malachite.