From Montauk to Sag Harbor, the long weekend was chockfull of fashion parties. 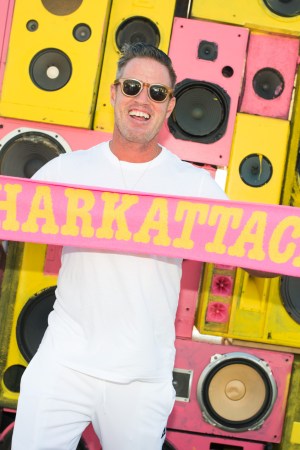 “I remember the last time I stayed here…” Rosario Dawson said, a knowing smile crawling across her face. The actress was on the back beach of Montauk’s Surf Lodge, overlooking a freakishly pretty sunset on Saturday night. “I was dead asleep, and all the sudden, at three in the morning, I hear, ‘Bitch Better Have My Money’ blaring. I popped right up. Like, fully sat up.”

The anecdote is very Surf Lodge of yore. Prompted by a series of noise ordinances and local residents’ complaints, the Montauk hot spot has had to chill out — much to the delight of those who prefer it that way. The transformation is palpable, and not just in the decibel sense. While the Surf Lodge still boasts a down-the-block line and is perpetually packed, the ratio of normal adults to insufferably drunk 22-year-olds sloshing around in said pack is tipping the scales favorably. In other words, it’s getting chicer.

The beach was dotted with fashion people who had made the trek east — Fiona Byrne, Leigh Lezark, Jacquelyn Jablonski and Brett Robinson, Jessica Joffe, Lucien Smith — for a Fendi-hosted dinner at Surf Lodge. The purpose of the evening was to kick off the #FendiRoadTrip, a merch tour of sorts: A shiny red, Fendi-logo-emblazoned truck toting priceless accessories will be traveling around the country for press and in-store events until its last stop of 2016, at Art Basel in Miami, in December.

Partygoers ogled the drawers of leather goods and bag charms (guarded by a security team all night, so as to prevent an inebriated Millennial from swiping a Monster Charm) before assembling for dinner in the restaurant. Dawson, the evening’s hostess, sat at the center of the long white picnic table that stretched across the dining room. Diners, bathed in the perfect filter-looking lighting emitted from the bulbous rattan lamps dangling overhead, chatted as the family-style meal was placed down.

“It’s always been cool and chill,” Dawson said, looking appraisingly at a seafood tower plopped down in front of her, of her time at Surf Lodge. “Maybe I’ve been going to bed before it’s gotten super rowdy.”

“It’s something we had to do, given the town’s…” Ben Watts, Shark Attack’s perennial master of ceremonies, started to explain, washing down his pause with a gulp of rosé. Beach balls, shark-shaped inflatables and girls in fringy crop tops and neon sunglasses bopped around him. “We always take the community’s feelings into account. We used to do it down on the beach. I liken it to a football game: Whatever gets past you, adjust and try to score with it. Whatever they throw at us, we try to do our best. One thing’s for sure, we’re not going away.”

The following night, interior-design impresario Steven Gambrel hosted an intimate supper — far, far away from anywhere a beach ball (or a Millennial in a fringy crop top) would be seen: Sag Harbor. The dinner, held to celebrate the opening of WATER | BODIES, an exhibition presented by the New York Academy of Art that showcases works by artists with a connection to the East End and the Academy. Mary-Kate Olsen, Donna Karan, Nicole Miller and Brooke Shields wandered Gambrel’s magnificent home. “Watch your back,” one guest warned to another. “You’re about the knock over a Rothko,” he said, semialarmed.

The weekend ended with — what else? — a cookout, thrown by Revolve and Chrissy Teigen. The model-turned-cookbook-writer snapped selfies all afternoon with her hubby, John Legend, while Emily Ratajkowski and Maxwell Osborne stuck in the Moët rose garden and drank some bubbly. “No, I couldn’t,” an exasperated partygoer said when proffered a coup of Champagne. “I met my quota last night at Fendi.”