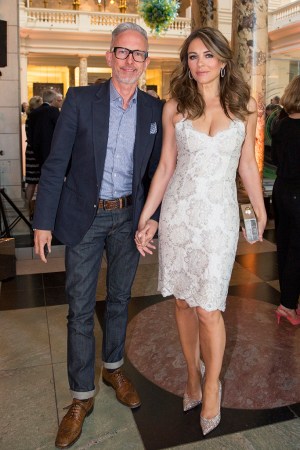 SOLE SISTERS, AND BROTHERS: At the party to mark the opening of “Shoes: Pleasure & Pain” at London’s Victoria & Albert Museum, guests’ eyes were cast downward much of the night, assessing one others’ outfits from the feet up.

“I saw one woman wearing two different shoes because she couldn’t decide which pair to wear,” said Charlotte Dellal, founder and designer of Charlotte Olympia, on Wednesday night at the museum.

Dellal said she’d put great consideration into her own footwear choice for the evening – a pair of gold sculptural heels from her spring-summer 2012 collection.

“I always dress from the shoes up, but I did a little vote and decided these deserved to come out,” she explained. “They are a favorite on the shoe wall. I have only worn them once before.”

The show’s curator, Helen Persson, said she faced “great difficulty” in choosing which shoes to wear with her strapless red dress.

“I chose these because they are made here in London, and I do think that is an amazing feat that they are still producing their shoes here, while everyone else is doing it in Italy or France. And they are comparatively comfortable,” she said.

Guests at the opening party, including Elizabeth Hurley, Sandra Choi, Patrick Cox, Angela Scanlon, Rupert Sanderson and Ellen von Unwerth, wandered around the show, which is laid out over two floors in five sections.

It contains about 250 pairs of shoes, spanning approximately 2,000 years, 20 countries and 70 past and contemporary designers.

“Throughout centuries and across cultures, impractical footwear, both for men and women, has denoted privilege and a leisurely lifestyle through design, material, constructions and decoration, making them unsuitable for manual labor – even for walking,” said Persson during a talk earlier in the day.

The “Seduction” section features a pair of “geta,” 20-cm platforms worn by “oiran” – Japan’s celebrity courtesans – and a painting from the early 19th century of a Chinese courtesan with ideal, 7.6-cm bound and slippered feet.

There is also a pair of nude ballet slippers with transparent soles and heels set at impossible angle, requiring the wearer to crawl – the result of a collaboration between Christian Louboutin and director David Lynch.

The “Movement” section addresses the way that shoes can alter how the body moves, and includes a pair of cowboy boots, Louboutin “Pigalle” stilettos, men’s platforms from the Seventies and a pair of high boots worn by French musketeers, who would fold the top down to create a bow-legged gait when not on horseback.

“Follow Me” examines the influence of royalty, nobility and celebrity on footwear trends. There is a pair of nude patent leather “Sledge” pumps by LK Bennett – a staple in the Duchess of Cambridge’s wardrobe; exquisitely embroidered shagreen-trimmed boots worn by the wife of the last Khan of Mongolia, and Canadian chamois moccasins embroidered with moose hair and porcupine quills worn by a high-ranking member of the native American Iroquois tribe.

The “High Society” section looks at the way in which high heels literally elevate the wearer above the crowd and features vertiginous heels by Noritaka Tatehana, as well as an ancient Greek terracotta statuette of Aphrodite wearing a tall platform, a style adopted by mortal women of the time.

The exhibition also highlights the process of designing and creating shoes, and features sketches and examples of shoes that have pushed the boundaries of construction and structure.

Films are shown throughout, including a fun montage of shoes in well-known films: Cue Marilyn Monroe tottering in “Some Like It Hot,” John Travolta strutting in “Saturday Night Fever” and Marty McFly in his futuristic “Back to the Future” Nike trainers.

Adding more stardust in the line-up are the ballet slippers designed for Moira Shearer in the 1948 film, “The Red Shoes,” as well as pairs worn my Lady Gaga, Sarah Jessica Parker, Queen Victoria and Kylie Minogue.

The exhibition is sponsored by Clarks, which is celebrating the 65th anniversary of its Desert Boot this year, and supported by Agent Provocateur. It runs from June 13 to Jan. 31.