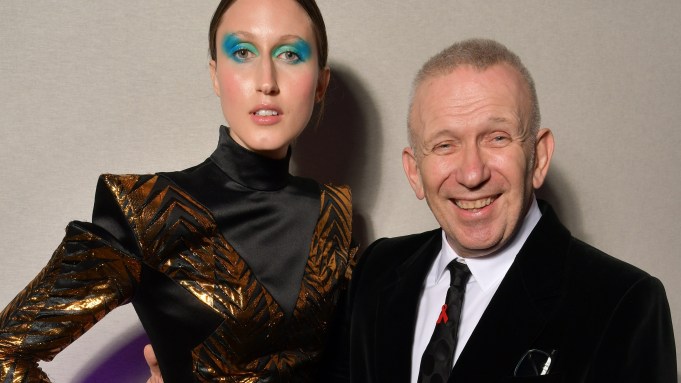 Line Renaud and Françoise Barré-Sinoussi — vice president and president of the fund-raising organization, respectively — sent in messages via video as they were unable to attend the event.

“Pierre Bergé did so much for fashion [and beyond]. He was fully and constantly engaged in a tireless fight for freedom, diversity, creativity, culture and innovation. He hated and denounced artifice and conventions when they betrayed his values,” Morand said. “Pierre Bergé was a man of enlightenment.”

A total of 800,000 euros was raised at the gala, which included a dinner orchestrated by Nicolas Sale, executive chef of the kitchens of the Ritz Paris, with a dessert by the hotel’s head pastry chef, François Perret.

Sitting at Gaultier’s table, Coco Rocha chatted with guests about the experience of dancing in his couture show the day before with her two-year-old daughter Ioni.

“I’ve been doing his shows forever, and when I told him I was pregnant, he said, ‘I can do a pregnancy dress. It’ll be so fun.’ And then I thought, why not have both kids on the runway? And he’s always up for everything,” she said.

“It was very special. I’m so happy that everyone liked it. You can assume some people thought it was stage mom-esque, but I was wanting it to just be fun. After Ioni came off the stage, she said, ‘Can we do it again?’ And I was, like, ‘Well, we have the finale….’ And then she asked, ‘We’re doing it again, right?’ And I said, ‘That’s it buddy.’”

Ali Mahdavi, who was wearing a replica of the Yves Saint Laurent brooch offset with Face Lace tattoo makeup by Phyllis Cohen, said this weekend he’ll be filming a music video for Violet Chachki “in homage to French artist Pierre Molinier.” The photographer is also in the early stages of preparing a feature film.

Hubert Barrière, artistic director of the Lesage atelier owned by Chanel, was looking remarkably relaxed given that couture week had just taken place. “Usually I’m blocked in the atelier, but this season, everything was on time. I actually got to see some shows,” he marveled. “Chanel was amazing. There was sunshine and with the flowers and birds — spring came early,” he said, listing Valentino as another one of his favorites. “The colors were fabulous. It was true haute couture, yet still young.”

There’ll be no rest for Barrière, whose team of embroiderers is already working on “the first act of the ready-to-wear collections.” “It’s nonstop, which is great because I’d get bored otherwise,” he said, adding that the secret to keeping up one’s energy is: “passion and curiosity.”

“I have to always replenish myself with water,” she said, adding that after the season ends, she has a massage. “I like reiki. I believe in it. I also like acupuncture — I love acupuncture.”

Cleveland also takes natural herbs “to rejuvenate your body and get yourself strong again.”

Hamming it up for the cameras, meanwhile, Marino and Ackermann were in a mischievous mood. When asked to share some secrets for how best to wind down after fashion week, Ackermann replied: “You really want to hear this?”

An eruption of guffaws.

“I think you know the answer,” Marino said cryptically. “You know exactly what I’m going to do.”