Fashion and celebrity converged at the annual fundraiser organized by Pierre Bergé. 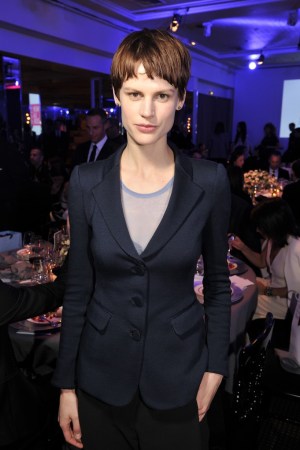 PARIS — The annual Sidaction Gala at the tail end of couture week is a chance for fashion folk to let their hair down — in Peter Marino’s case, a shaggy Mohawk dyed navy blue.

Propping his leather cap back on his head, the architect settled into his seat, flexing a bicep for willowy art dealer Almine Rech. “It’s really hard,” she nodded approvingly.

Designers and celebrities poured into the Pavillon d’Armenonville for the annual fundraising event for AIDS research and patient care.

Swank said her next film project would be “The Homesman” opposite Meryl Streep and Tommy Lee Jones, but she stiffened when talk turned to fashion projects. She was the guest of honor at Gérard Darel’s table, prompting speculation that she could be the next American actress to front its advertising campaign.

Binoche is on an artistic streak. Having recently wrapped a film in which she portrays sculptor Camille Claudel, she’s heading to Vancouver in March to star opposite Clive Owen as an art teacher and painter in Fred Schepisi’s “Words and Pictures.”

British actor Benn Northover is preparing to film a “passion project” about war photographers in Russia with Norwegian director Knut Åsdam. “The film is very much about someone who’s seen too much of humanity, who’s seen too much of what humans do to each other, and who is trying to get away from all this,” he said.

Lara Fabian revealed she’ll be performing a number from her upcoming album, “The Secret,” at a dinner due to be held by Sidaction president Pierre Bergé on Sunday night following a pro-gay marriage and adoption rally in Paris. “It’s a very gentle song with a very important theme that speaks to the occasion,” she said.

“I love your voice, you should be a singer,” said Canadian electronic artist Claire Boucher, a.k.a. Grimes, admiring the gravelly voice of fellow Chanel guest, Anna Mouglalis. “I hate my voice, I sound like a baby. I’m always jealous of that kind of voice, and then when I smoke, I just lose mine,” Boucher shrugged.

French actress Clotilde Hesme, who was also at the Chanel table, said she’ll soon be tackling Shakespeare for the first time, in the Odéon theater’s staging of  “As You Like It” directed by Patrice Chéreau. “I play Rosalind, it’s going to be quite a challenge,” she beamed.

Statuesque Fan Bing-Bing, who wore a yellow Louis Vuitton gown, said she had spent the day at Moët & Chandon’s chateau in the nearby Champagne region shooting an international campaign for the brand, due out this summer. “The place was so beautiful, and I love Champagne,” she enthused.

Seated either side of Jean Paul Gaultier, Valérie Lemercier and Farida Khelfa playfully tussled over a batch of raffle tickets held aloft by the designer. Lemercier, France’s answer to Tina Fey, leafed through the catalogue of prizes making loud commentaries.

“Non, non, non, I don’t want Guy Laroche, I want Hermès,” she exclaimed, shortly before striking gold with a winning ticket for a pair of Christian Louboutin heels. “I just hope they’re my size,” she said.

Style maven Eugenie Niarchos accessorized her Pucci gown with lightning bolt and tortoise shell-shaped rings from her fledgling jewelry line, Venyx, which has been on sale in London’s Shizaru Gallery in Mayfair since December and will be launched officially over the coming months. “It’s fine jewelry, but fun and easy to wear,” she said, wiggling her fingers.

Roland Mouret is also hoping to grow his accessories business with a new line of handbags for next fall. “We are waiting to see if they arrive. So if you see them on the catwalk, it means we are launching them,” he laughed.

But the ever-outrageous Marino had them beat, with three small silver daggers banging against his leather vest. “Now I wear weapons around my neck, so it’s easier to pass through airport security,” he joked. “I’ve got meat cleavers, too.”