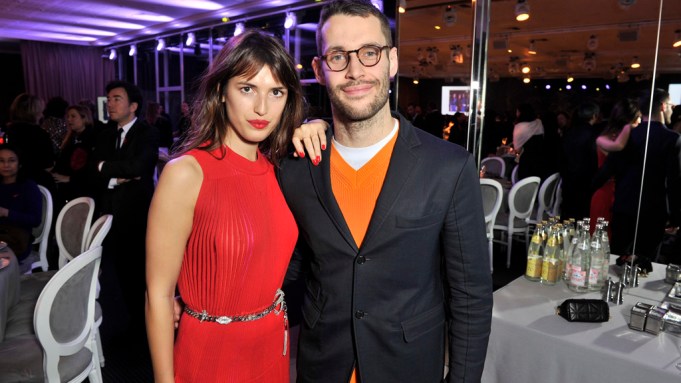 PARIS — Actress Camille Cottin — let’s call her the Amy Schumer of France — didn’t sugarcoat how the gala evening would go down: Not much in the way of food, endless speeches and indecipherable statistics on a video loop.

As the evening’s emcee, she was exaggerating — though not by much — at the annual Sidaction gala that caps off couture week here, hosted by former YSL boss Pierre Bergé. The event was also marred by a taxi strike that made challenging the journey to the Pavillon d’Armenonville in the remote Bois de Boulogne.

“That’s a lot of beeping,” said Suki Waterhouse after she finally arrived in a little black dress by Dior.

The actress is to star in “The Bad Batch” this spring, opposite Jim Carrey and Keanu Reeves. Waterhouse kept mum about the love story set in a community of cannibals, which might premier at this year’s Cannes Film Festival, but said this: “It’s got horror elements in it.” And her character? “A troubled one,” she smiled.

Blanca Li, in a sheer number by Jean Paul Gaultier, joked: “The traffic — terrible, no? I was saying, I should have jumped on the motorbike, but then I looked at my dress…”

Chiara Mastroianni was among women who opted for a tuxedo, hers a number by Pallas. “I have always taken heat for not wearing skirts. For me, it’s not a trend, it’s a necessity,” she said, getting ready for the March premier of her new comedy “Good Luck Algeria.” The movie is based on a true story about “a guy who decides to compete for the winter Olympics to save his company from bankruptcy — and I’m his wife,” Mastroianni explained.

Monica Bellucci said she has nothing against tuxedos. “I think a tuxedo is very feminine too. It’s just another way to stay feminine,” the Bond girl observed, her curves poured into a body-hugging gown by Balmain.

No gown for Betty Catroux, who held out her spindly arms to show off the long fringe on her suede Saint Laurent jacket. “Hedi, of course,” she said, referring to Hedi Slimane, the label’s creative director. “I only wear his things.”

Huppert is rehearsing for a play, “Phaedra,” slated to open in mid-March at the Odéon-Théâtre de l’Europe.