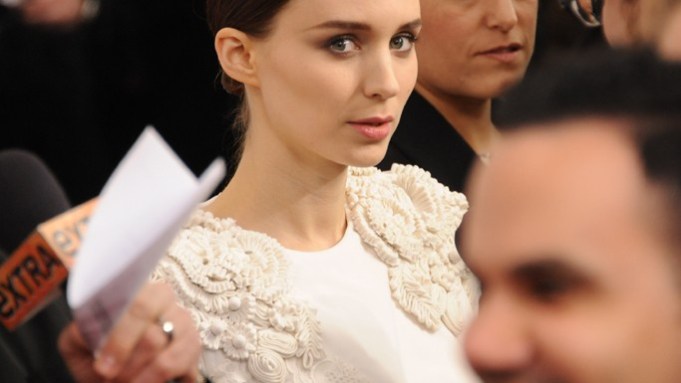 Stars Jude Law, Rooney Mara, Channing Tatum and Catherine Zeta-Jones came out to the AMC Loews Lincoln Square theater in New York on Thursday night for the premiere of Steven Soderbergh’s newest and last theatrical thriller, “Side Effects,” hosted by the Cinema Society and Michael Kors.

“The highlight is just turning up for work everyday on a Steven Soderbergh movie with great actors and a fantastic script, it’s just an actor’s dream,” said Zeta-Jones of working with the director, who, at age 50, has now publicly retired from moviemaking. As for the film’s dark depression and prescription drug-exploring theme, Zeta-Jones said, “It’s just part of our culture. I think that’s what’s interesting about it, that we live in a culture where quick fixes, even from technology, everything is supposed to be quick or done yesterday and when medication doesn’t work we’ll try the other one. You see something on TV, try something else.”

Mara, who wore a lacy structural Alexander McQueen dress, spoke of her preference for living a “holistic life” and alluded to perhaps taking on a lighter acting role in the future. Of filming she said, “I try and only take on things that will be a challenge and this was definitely [one]. It was an amazing experience. We had a lot of fun.”

Although Law and Tatum arrived too late to speak to reporters, a group of lucky passersby got a glimpse of the stars through a sheer tent. Upon Tatum’s arrival, an audible wave of female screams rose through the night. The after party was held at the Stone Rose Lounge on the fourth floor of the Time Warner Center. Celebrity revelers included Mara’s sister Kate, and Soderbergh regulars Matt Damon and Michael Douglas, stars of the director’s upcoming swansong, a Liberace biopic set for HBO later this year.