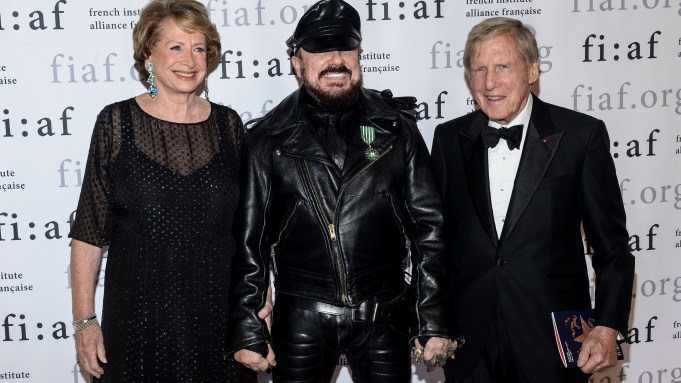 For old friends Sidney Toledano and Peter Marino, a Franco-American cultural exchange is simply a way of life. On Monday evening, the French Institute Alliance Française awarded Dior Couture’s president and chief executive officer along with the luminary New York-based architect at the annual Trophée Des Arts Gala held at the Plaza Hotel.

Toledano, who last week announced he would be departing as chief of Dior after 23 years at the luxury label, received from the privately funded institution the 2017 Pilier d’Or award. “With the announcement we had last week it will be more emotional than I expected,” said Toledano at an intimate VIP cocktail reception ahead of the dinner in the hotel’s grand ballroom.

The executive, who was born in Casablanca, Morocco to a Spanish father and Turkish mother, calls himself “a pure product of the French culture.” Starting in 2018, the 66-year-old will pass along leadership of Dior Couture to Fendi’s Pietro Beccari and assume the role of chairman and ceo of LVMH Fashion Group, which he says will be much different from his responsibilities at the now 70-year-old French label.

“Dior has been a fantastic journey and a lot of passion,” he continued. “I wanted to jump from one train to another one when I have the high energy. I know the group is expecting me to give guidance to all the ceo’s and it will be a different job.”

At Dior, Toledano has assumed a “hands-on, helicopter” approach to management. Now, as an adviser to brands including Céline, Loewe, Givenchy and Marc Jacobs, he will look to grow each brand while facing competition within the ever-changing industry.

“The way I’m going to talk and the challenge of the future are going to be different [than what I did for Dior],” he said. “With the new generation, the world is changing at a fast pace.” In an effort to stay ahead of the curve, Toledano regularly meets with “people outside the business — intellectuals, real people” to get a varied perspective on his business.

With his new role, Toledano will no longer have day-to-day involvement in Dior, but admits he will keep a keen eye on its direction. “I hope they keep the house spirit,” he revealed. “Growth will be there, organization, more stores, more development, but the spirit has to be there.”

It was his more than two decades of work at Dior for which the father of three was lauded on Monday night. Speaking to the tightly packed room, which FIAF President Marie Monique Steckel attributed to a multitude of Toledano and Marino’s “enthusiastic fans,” the business executive humbly toasted to his longtime collaborator’s enduring and inspiring creativity.

“We worked [together] for 21 years and it’s the same Peter, but I don’t know why he changed the garments,” he kidded of Marino’s signature leather biker look. “He’s the same dreamer, the same passionate…joy lover.”

The pair’s friendship is so strong, in fact, that Marino would have been involved in the evening regardless of being honored with the 2017 Trophée des Arts award. The 68-year-old architect, whose extensive luxury retail portfolio includes Barneys New York, Dior Place Vendôme and Louis Vuitton Hong Kong, was initially asked by Toledano to introduce him at the dinner.

“It was cute that they asked him first,” explained Marino. “He’s a Parisian and doesn’t know that many New Yorkers, so he called me up and said to me, ‘Peter will you present me the award?’ Of course I said it will be delightful. We called them up and gave them my name, but they said ‘no’ because I was being honored, too. I was going to be here either way.”

In a tear-filled acceptance speech, the Cornell grad admitted it is FIAF’s work in teaching arts and French culture to public schoolchildren that struck a personal chord. “Wait, I’ve got to get this out,” he said through streaming tears in a touching onstage moment. “I’ve benefited enormously from an arts education and a music education in New York. When they cut the programs for funding, I was devastated.”

Summarizing the event’s convivial trans-Atlantic spirit, the nonprofit’s Steckel quoted from the late Christian Dior, to whom much praise had been given throughout the night. “As he said, whatever you do, whether for work or for pleasure, do it with passion. Passion is the wonderful word of the evening.”