Miller made a sartorial splash at the premiere of "Mysteries of Pittsburgh" in a flame sculptural number by Marios Schwab and a set of matching ruby lips. 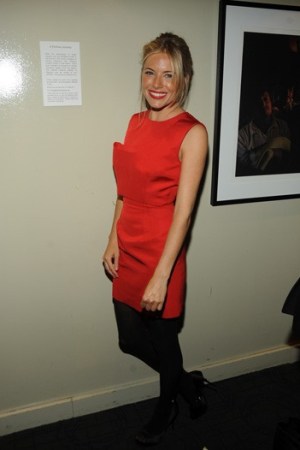 Sienna Miller could have worn a barrel to the Tuesday night screening in Manhattan of her latest film, “Mysteries of Pittsburgh,” and the actress still would have won the title of “Best Dressed Co-Star.”

Miller, whose only competition for the evening was “Mysteries” actor Peter Sarsgaard, made a sartorial splash anyway, hitting the red carpet of the Landmark Sunshine Cinema at the Cinema Society and Links of London hosted event in a flame sculptural number by fellow Brit Marios Schwab and a set of matching ruby lips.

“I have always loved fashion as a form of expression,” said the actress, who made her fiery look pop with black satin Roger Vivier peep-toe pumps and “a pair of really old tights.” (The starlet later added a black wool Chanel jacket into the mix at the after party at Table 8, the yet-to-be-opened restaurant in the Cooper’s Square Hotel.)

But Miller, who designs a clothing line Twenty8Twelve with her sister, Savannah, made it clear that acting is still her number one priority. “That is really my passion and it’s what enables me to have the label,” she said.

As for what it’s like working with her big sis, Miller dismissed any rumors of sibling rivalry. “I had approached [working with my sister] with trepidation when we first began,” she admitted. “[Twenty8Twelve] is an amalgamation of both our styles and that’s why it works. We never argue.”

“We had a fight once. It was before our show, which was incredibly stressful and we both felt completely inadequate. We were like ‘I am crap,’ ‘No, I am crap.'”