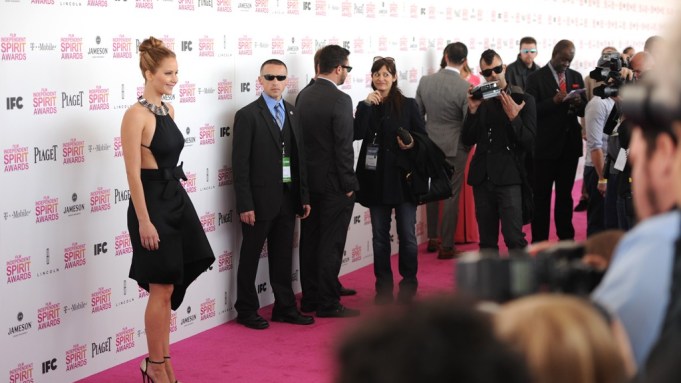 Andy Samberg hosted, looking dapper in an emerald-green suit. The “Saturday Night Live” alum said, “I’m channeling Rod Stewart today.” Nobody was spared a jab — from Oscar Pistorius to Anne Hathaway. After Derek Connolly won the first award for best first screenplay for “Safety Not Guaranteed,” the snail’s pace of his acceptance speech caused Bryan Cranston to walk onstage and pour him one of the minibar-sized bottles of Jameson that adorned each place setting, while Kerry Washington jokingly led him off stage. When it came time for Salma Hayek to present best actor, the hoarse actress warned, “Normally this is a great gig; when men win, they want to grab you and kiss you, but I’m telling you, don’t do it. Not because my sexy husband [François-Henri Pinault] is in the audience — he’s French, they don’t care about that stuff — but because I’m sick.”