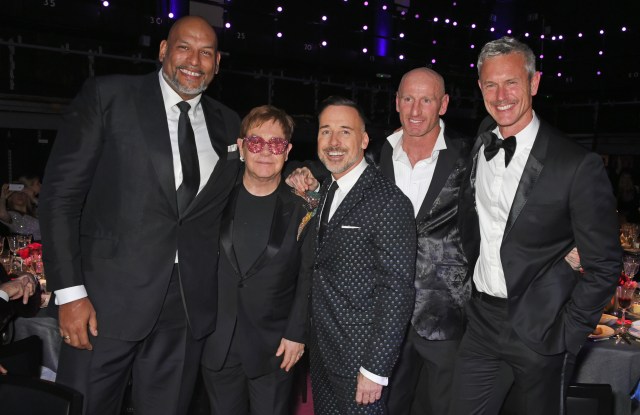 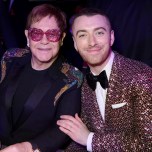 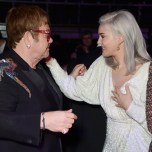 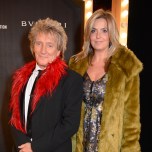 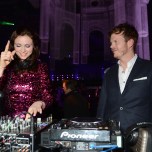 CURE ALL — Love was the big message at Club Love, an all-singing, all-dancing, camp-as-you-like evening of cabaret, glitter and spectacular drag queens hosted by Sir Elton John and David Furnish in benefit of the Elton John AIDS Foundation.

“Elton’s mantra is, ‘Love is the cure,'” Furnish told WWD. “He wrote his philanthropic memoir a few years ago and in it, he basically says, ‘We can’t leave anyone behind, we can’t make judgements. I was a drug addict, I was off the rails for years. Didn’t my soul deserve redeeming? Look at what I’ve done in the 27 years since I’ve been sober. You could have written me off in the Eighties as just a washed-up, self-indulgent drug addict.”

“But meeting Ryan White and his family in America (White was famously diagnosed with AIDS in 1984 and given six months to live following a blood transfusion at age 13 while living in Kokomo, Indiana), a light came back on in his soul and he rediscovered his humanity and he’s done pretty well in the last 27 years. If we can take that same attitude to anyone who is struggling or marginalized, it’s amazing when you put your arm around people what they can do with love and support.”

“Yes, yes, it’s me, that queer from the television,” deadpanned Graham Norton as he took to the stage to act as compère for the night before introducing Sotheby’s Lord Harry Dalmeny to run the charity auction.

“We normally tend to leave very famous people wearing what they wore when they arrived, but tonight Ellie [Goulding] is going home several pounds lighter, unlike the rest of you, because this groaning cacophony of diamonds around her neck is about to belong to one of you,” teased Dalmeny. “Designed, made and given with love by Bulgari, warmed so that it doesn’t even feel cold by Ellie, she is your necklace fluffer and is going to give you that necklace at perfect body temperature.”

The one-of-a-kind 18-carat white gold and diamond Diva’s Dream necklace was eventually sold, raising 50,000 pounds (about $66,990 at current exchange) for the Foundation.

“The reason that we [originally partnered with EJAF] was for children and the mothers with HIV and transmitting it to children,” Vincent Reynes, Bulgari’s U.K. managing director, told WWD. “There are a lot of young, African women who are mothers without wanting to be mothers, and at the same time having kids, so it’s all about education, and education to us is very important, it’s the same process as Save The Children, the other charity that we are supporting.”  After dinner, during which Sam Smith performed a number of his songs and Elton John introduced singer-songwriter Anne-Marie, who also performed, there was a dramatic Kabuki drop, punctuated with an explosion of pink glitter, thus announcing the appearance of dozens of wildly attired drag queens and marking the opening of the Belvedere RED After Party, complete with fairground attractions and tarot readings from the Psychic Sisters.

The dance floor was a crowded affair, thanks to DJ sets from DJ Fat Tony and Me & Mrs Jones, aka Richard Jones and wife and gay icon Sophie Ellis-Bextor, who was wearing a sequined dress by LK Bennett X Preen and a necklace by Rachel Jackson London filled with birthstones of her family.

“I have been watching ‘Ru Paul’s Drag Race’ with my eight-year-old at the moment and I’d be thrilled if one of my sons is gay. Sometimes I get my hopes up a little bit but I am not sure,” she said. “They are brought up around a lot of gay culture, a lot of it permeates my world. But, if anything, he’s going to be disappointed that there aren’t more incredible, flamboyant trailblazers out there. The thing is, what I really want is to raise kind, tolerant, interesting and interested people.”