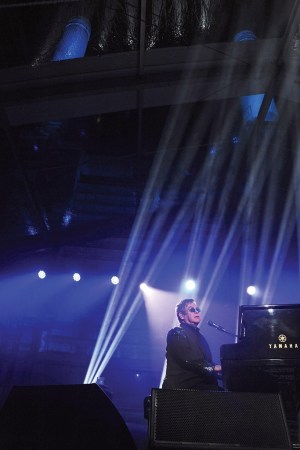 POWER PACK: Figures from fashion, music and film battled the London traffic on Wednesday night — caused by a two-day Tube strike — to catch a one-off performance by Sir Elton John at the Battersea Power Station hosted by the site’s property developers.

Evans and Renner shared a cigarette as John performed a selection of his hits. “I would never sing an Elton song at karaoke,” said Renner. “I wouldn’t want to butcher it!” Evans replied: “But they’re all brilliant.”

Old friends Jones and Treacy were in a huddle in the VIP area, loitering long after Elton’s set had finished, and finally making their departure at 1.30am, after Jones had spent some time talking at young British actor Luke Treadaway.

Guests watched John perform a 90-minute set inside a perspex structure at the former power station. The perspex was meant to keep noise levels down so as not to disturb a nest of newly hatched falcons, a protected species in the U.K.

Food stalls served up shrimp and grits, hot churros, mini cheeseburgers and chocolate brownies, while more than 900 bottles of Veuve Clicquot were consumed. The Battersea Power Station is undergoing a 750 million pounds, or $1.26 billion, refurbishment with 3,500 flats.