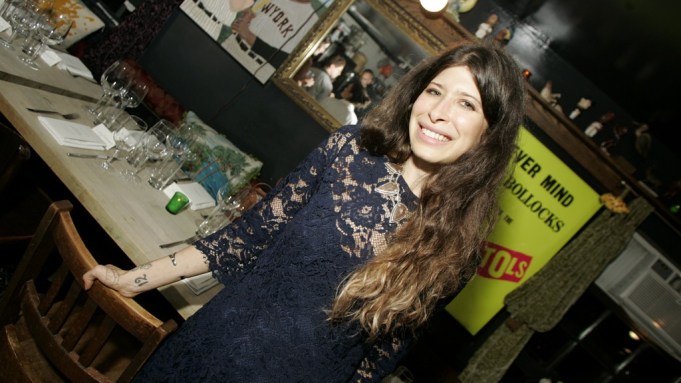 It’s not all that unusual to catch your fair share of party crashers during New York Fashion Week. But the uninvited guest at Pamela Love’s dinner party on Tuesday evening had a special distinction — it was Skrillex.

Hosted by Bon Appetit, the gathering was an affair, held at The Spotted Pig’s test kitchen, where guests, including Helena Christensen, Mara Hoffman, Athena Calderone, Ally Hilfiger, Morgan Saylor and Langley Fox Hemingway, enjoyed a unfurling feast prepared by April Bloomfield. Love’s fine jewelry collection was draped across the preparation station. Forty minutes into the cocktail hour, however, it was the half-shaved head of the DJ that drew the most attention — no offense to Bloomfield’s delicious deviled eggs.

Skrillex arrived with a gaggle of scruffy guy friends, timidly posting up at the end of the bar. A pr girl noticed the newcomer, resulting in a visible look of panic. Had she known he might drop by? A quick wide-eyed shake of the head. Uh-oh. The place cards had already been set, and the table was packed enough to begin with — can one really say, “Sorry, Mr. Skrillex, but…”? Luckily, it never came to that, as the DJ left on his own accord just moments before guests took their seats. Crisis averted.

Christensen also ducked out before dinner to attend boyfriend Paul Banks’ record release party (he’s in the band Interpol). The model had come straight from work, having shot a number of up and coming models, including fellow guest Hemingway, for Purple Magazine. “It was a whirlwind,” she said. “It was really cool to see all the girls.” Christensen was making a brief driveby at the event to support Love, a new friend.“I recently photographed Pamela for a portrait project I’m doing at her home and just thought she was very nice,” she explained.

The sentiment seemed to echo through the room, as guests ooh-ed and ahh-ed over Love’s jewelry, as well as the designer herself. “I’m just happy that everybody is here. I’m not good at speeches,” Love said, starting a pre-dinner toast. Afterwards, guests tucked into the first course of grilled heirloom tomatoes and soon enough, Skrillex was once again the topic at hand. “Oh, I don’t know him,” Love admitted. “I think he is friends with my friends.” That seemed to be the general consensus of the table. A quick brief was offered; his birth name is Sonny Moore, he now operates as EDM wunderkind Skrillex, but previously fronted a post-hardcore emo band named From First to Last, a mainstay at Warped Tour (alternative rock’s answer to Coachella) in the early 2000’s.

And with that cleared up, day six of New York Fashion Week ended with Ernest Hemingway’s granddaughter Googling Warped Tour. What a town!