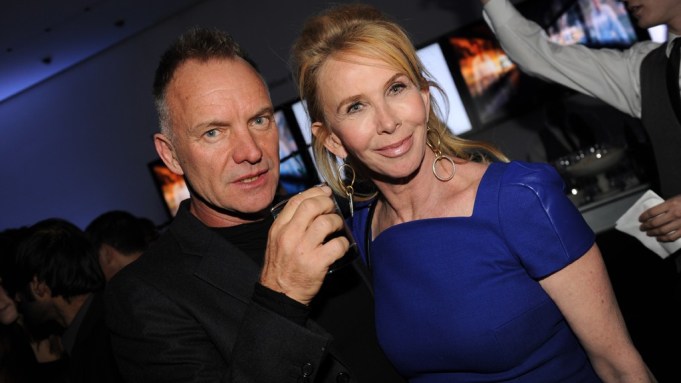 On Monday night, exactly a week after Hurricane Sandy wreaked havoc on the East Coast, the New York social set seemed slightly back to normal at the Ziegfeld Theater. There, AT&T and Epix sponsored a screening of the latest entry (23 and counting) in the James Bond franchise, “Skyfall,” and though neither Daniel Craig nor any of the cast’s primaries made the rescheduled affair, screenwriter James Logan attended, as well as guests including Ron Burkle, Norma Kamali, Seth Meyers, Muffie Potter Aston, Gigi Mortimer and Pink Floyd’s Roger Waters.

Following the film, guests headed to the Museum of Modern Art, where they found opulent table settings in the expansive ground floor lobby, Bombay Sapphire cocktails and a wait staff wielding hors d’oeuvres through the crowd on five-foot-long sticks.

The evening also served as a benefit for the Tribeca Film Institute and the Mayor’s Fund to Advance New York City.

Sandy still proved to be the most popular talking point of the night among guests.

“Once you got over the initial [stress of] having to leave your apartment, it was kind of fun,” said Lauren Remington Platt, of how she spent her nights without electricity. “I lived with a friend uptown. It was sort of a glorified college experience…except you have more money now and the rooms are nicer. Or rather, the couches are nicer.”

Sting and Trudie Styler mingled their way through each room, attracting the company of friends, flashbulbs and occasionally their daughter Mickey Sumner.

“We were very fortunate during the hurricane, unlike a lot of people. We had fun,” said Sting.

“What we did was not for publication,” he continued, with a mischievous nod to his wife, who gave him a knowing laugh.