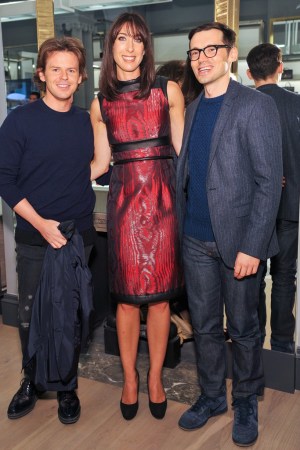 FERRY LIGHTS: “Diet. That’s the secret,” said David Gandy. “You can do as many ab crunches as you want, but if you have fat over it, you’re not going to see it.” The model — who just created a new fitness app — joined fellow revelers at Smythson on Monday night to mark the brand’s 125th anniversary.

Kane said he was happy that Cameron chose to wear one of his dresses for the evening. “I love strong women,” he said, adding that he’s off to Paris later this week to work on fabric development for fall.

Nearby, Liberty was hosting a party for Kenzo’s creative directors, Humberto Leon and Carol Lim, in the first-floor atrium of the Regent Street store. The clothes had been cleared away to make way for guests such as Lulu Kennedy, Olivier Zahm, Susie Bubble, Henry Holland, Alexa Chung, Daisy Lowe and Matthew Stone.

Leon and Lim were on a flying visit to London, checking out their favorite vintage haunts. Lim is now the proud owner of “an old Ossie Clark dress — superprinted with an open neck and a lot of embroidery” — from the Vintage Emporium off of Brick Lane.

Holland said his new eyewear collection comes out in November at Browns. “They look like eyelashes and have the words ‘Cross my heart and hope to die stick a needle in my eye’ on them,” he explained.