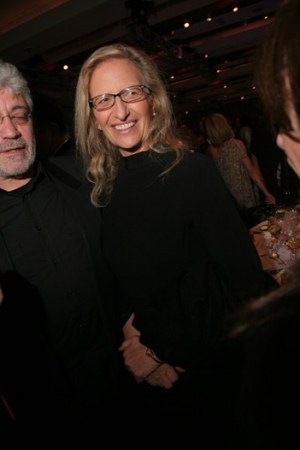 A crowd of 700 packed Chelsea Piers on Tuesday night for the International Center of Photography’s 25th Annual Infinity Awards. During cocktails at Pier 60, Mark Badgley and James Mischka paid their respects to Annie Leibovitz, who was receiving the Lifetime Achievement Award and who shot their 20th anniversary spring campaign, while Amanda Brooks perused the work on display.

“I interned at the ICP in college — I worked in the library and dark room,” she recalled.

A crowd including Iman, Francisco Costa, Dree Hemingway, Brian Reyes and Gilles Mendel sat for a dinner of tomato salad and lamb, as nine awards were handed out and speeches were made.

“I want to thank everyone who ever said ‘Yes,'” said Tim Walker, accepting the Applied/Fashion/Advertising Photography honor.

During dessert, Gloria Steinem introduced Leibovitz with a lengthy and praise-filled oration.

“I think Annie Leibovitz is the photographer of my time,” she declared, recalling some of the snapper’s early work. “She photographed Lily Tomlin for the cover of Ms. Magazine and we didn’t do it justice. I’ve always felt I owed her an apology.”

Leibovitz, for her part, kept things simple. “I thought, ‘Wait a minute, I’m too young [to be receiving this award]. But photography is not something you retire from,’ ” she said. “Tonight is my four-year-old twins’ birthday and they wanted to come. And I had to tell them they could come to my next lifetime achievement award.”