‘SNL’ Cast’s Night at the Museum 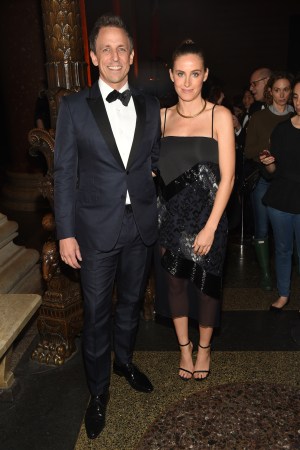 “This is not what I looked like leaving the house,” a guest of Thursday night’s American Museum of Natural History gala frowned, examining herself with a makeup compact. She wasn’t alone. The air outside was cold and misty, causing many an updo to unspool and many a blowout to fan out. The Uber surge probably didn’t help but inside the hallowed foyer of the museum, many funny faces — nearly the entire cast of “Saturday Night Live” — cheered up guests.

Lorne Michaels has long cochaired the gala and, as “SNL” boss, mandates the support of his cast. Joining them under the towering brontosaurus was Helen Mirren, Tony Bennett, Natasha Lyonne and Ben Stiller, whose newly dropped “Zoolander 2” trailer went viral earlier in the week. “We were surprised because we didn’t know if anybody would even remember who Derek and Hansel were,” Stiller said when asked about the reaction to the Derek and Hansel cameo on the Valentino runway in April. “It took a lot to coordinate, about a year of planning. I think the Valentino designers really surprised people by being willing to do it because obviously in the fashion world, you have to take yourself seriously but they have enough of a sense of humor about themselves.”

Soon after, a man who’s made a living having a sense of humor about himself took the stage. “I hope you all had a safe and comfortable subway ride here,” Seth Meyers said. “This museum is home not only to incredible artifacts but houses the world’s largest collection of Jewish names on plaques,” he added, pausing for the room’s chortles. “I’ve hosted three times and I’ve used that joke every time but if you book [Lynyrd] Skynyrd, you want to hear ‘Free Bird.’ Am I right?”