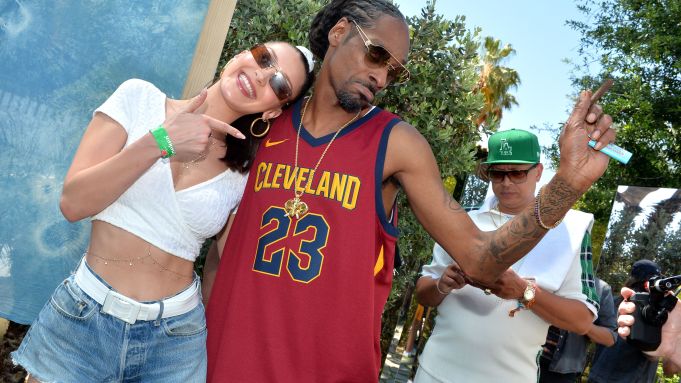 Those who flock to the Coachella Valley Music and Arts Festival to let loose and wear cut-off shorts would have been happy at the annual Levi’s brunch on Saturday, which featured the musical stylings of Snoop Dogg and Heron Preston, along with customization stations for personalizing denim and T-shirts.

The laid-back event hit the right notes for those like Bella Hadid, Hailey Baldwin, Joan Smalls, Romee Strijd and Brooklyn Beckham, who got their groove on by the pool of the Colony Palms Hotel.

But first, VIPs had to get kitted out in a private fitting suite. “I’ve always had vintage denim shorts and growing up I had the widest selection, and I would find the best ones that fit me perfectly,” Hadid said. “Now I’ve found these and I’m never letting them go,” she said of her new pair. “I’m over the whole being uncomfortable at Coachella thing, I just want to be able to run around and experience it and do my thing. I’m dying to get out to the party.”

As she made her way to the pool, Hadid continued, “I might change later for Beyoncé. I have a full Chanel outfit but it’s literally a tracksuit, like gymwear, so it’s really comfortable, actually more comfortable than even this.”

Preston kicked the party off with what was supposed to be a one-hour set, but stayed at the poolside turntables for an extra hour because by then, the crowd was in full dance party mode.

“The house guy was supposed to play and I was like, ‘No. Even though I’m not supposed to play, I want to play just so I don’t break up the energy,'” he said. “I never pre-plan, there’s never like a playlist or anything. I have a whole library of music and based off of who is here and the vibe, that’s what I’ll play.” On this occasion, it was, “Rihanna. A lot of Rihanna.”

Baldwin said she was channeling Claudia Schiffer with her jeans and bustier look. “There’s this photo of her where she’s wearing this bejeweled bustier top, Chanel earrings and these little white sunglasses so we just re-created the look because I thought it was super cute and very fitting for the weekend,” she said.

“I’m not really changing a lot today. I’m gonna put jeans on and I just bring a jacket. It’s too stressful to do too many changes in a day because it takes time and I just want to get to the festival.” As for her accessories, she said, “I’m super minimalistic. Usually I just take what I need and put it in my pockets and hope I don’t lose anything.”

The overly dressed trend is clearly out with models, as Strijd said she was only planning to change once. “At Coachella, it’s really important to just go with the flow,” she said.

The crowd reached a fever pitch as Snoop Dogg spun records of his own greatest hits, including the anthem “California Love.” “If anyone has some good weed, bring it on up here.” He was clearly joking, because he had his own supply handy; the contact high from the cloud around him was hard to miss.

Afterward, he retired to an upstairs room at the hotel, where Strijd was getting her braids touched up on the balcony. He told her hairdresser, “Me next, please!”