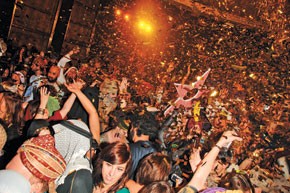 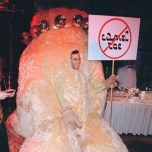 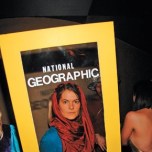 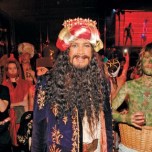 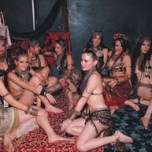 Marc Jacobs’ annual themed holiday party is notorious for the extravagant costumes its revelers — mostly inspired design kids — dream up. This year’s “Arabian Nights” blowout at the Rainbow Room saw an endless stream of snake charmers, Jeannies (as in “I Dream of”), sheikhs, veiled belly dancers and turbans galore. And as usual, skin — and little else — was most definitely in.

“I wanted to do Saint Petersburg and Russia, and they all said, ‘No, no, no,'” said Robert Duffy. “I said, ‘OK, Arabian Nights it is.’ All the guys are happy, because it means they don’t have to wear any clothes.”

The long line of partygoers at the elevator banks had quite a few Rockefeller Center tourists gawking in disbelief (Welcome to New York! Do you like my codpiece disguised as a snake?). But once upstairs, the scantily clad guests fit right in with the erotically charged scene.

“I need more pasties, mine are falling off,” exclaimed one nearly naked girl to her friend on their way to the bathroom.

One room was dedicated to tableaux vivant, including a sword swallower, a tarot reader and a harem of gold-coin-clad women. Next door, the ballroom was replete with buffed, bronzed and oiled go-go dancers who would have made Steve Rubell proud (one was even fashion-aware enough to match his fez to his nipple tassels).

Many of the most creative ensembles, however, went home empty-handed, including a National Geographic cover, a box of Camel Lights, a Lawrence of Arabia with his sex slave on a leash and a man riding a stuffed camel attached to his hip. The latter received some dubious praise. “You look like you’re f—ing a camel,” his friend said.

In the thick of it, an immobile Jacobs surveyed the scene from inside his giant fuzzy camel toe costume, which raised a few eyebrows, and was big enough to house his entire design staff. “It’s just me in here, no one else,” the designer said with a smirk. “But I am hoping it will get busier as the night goes on.”