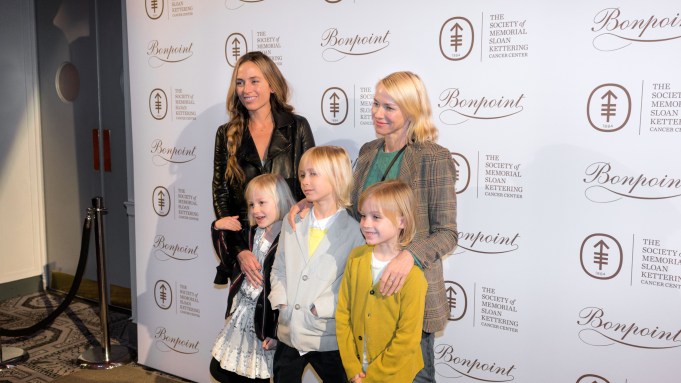 “By a show of hands, how many people have ever used a hula hoop?” One would think there’s only one soirée on Park Avenue where the question was being posed on Tuesday afternoon and that is the Bunny Hop, The Society of Memorial Sloan Kettering’s annual family-friendly fund-raiser, now in its 25th year. Moms Naomi Watts, Rebecca Minkoff, Jill Kargman, Olivia Chantecaille, Amory McAndrew and Shoshanna Gruss brought their tots along for an afternoon of petting zoo action, arts and crafts fun, and a far higher consumption of cheese and crackers than your average benefit — the kiddies helped.

“I just walked in and I’m already eyeing the wine,” Kargman said, likely vocalizing the thoughts of every other mother in the room. Indeed, in one corner the zookeeper had wandered off, leaving youngsters to handle equally junior livestock, to their delight. In another corner kiddos gathered around to see a snake, this time thankfully in the hands of an expert.

Eleanor Ylvisaker, the chair of the associates board, was with her two children, Ella and Alastair. “They love this party, and talk about it all year-long,” she said. “There’s a lot of anticipation.”

“Last year was the first year I was chairman during the Bunny Hop. And as amazing as this party is, I felt really strongly that our kids should be brought into the aspect of service and what this party is for,” she continued. “So in the invitation, we sent out an insert that asked parents to talk to their kids about service and to collect their coins and at the party we had a coin machine where they could donate their loose change. It’s a way for the kids to connect with the charity aspect of it.”

This year is the first time children’s brand Bonpoint sponsored . “I came last year and I loved the concept,” Florence Mars, the company’s U.S. vice president said. She had in tow her 6-, 10- and 12- year-olds. “I told them why we were doing this partnership,” she said. “But I didn’t tell them it would be this awesome.”

Tuesday’s benefit is one of the first years the event has been in its new home at 583 Park Avenue, after years at FAO Schwarz. “FAO Schwarz was my nightmare because the kids were just asking for s–t, and you were just like, ‘no, I’m not buying you a small Mercedes-Benz because we’re here supporting kids who are battling cancer,’” Kargman said.

In addition to the do-gooding, the afternoon also apparently functions as a warning for those considering parenthood. “I enlisted my brother to come one year and I joked that he’d go straight from here to the vasectomy clinic,” Kargman said. “And now his kids are coming.”