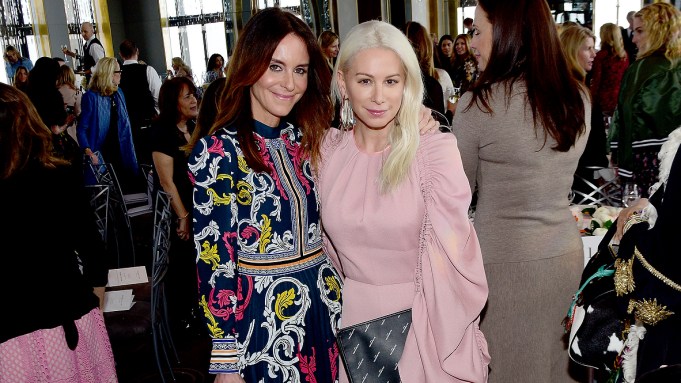 Fashion week has only just begun and already New Yorkers are taking a break — only for charity.

The Society of Memorial Sloan Kettering held its annual winter lunch, in partnership with Net-a-porter, on Thursday afternoon. In contrast to last year’s cloudy skies, the Rainbow Room offered a clear view of Manhattan, and much like last year, long floral dresses were the outfits of choice.

“I’m not usually here for fashion week, so this is my first event and then I might go upstate and come back when it’s over,” said Helena Christensen. She wasn’t too keen on talking fashion, but she was more than ready to talk charity.

“We try to support every single foundation that actually works with diseases like cancer,” she continued. “That is one of the most horrendous situations you can be in, to have family or friends suffering from that, so I try to do everything I can to support it. I think it’s great that fashion businesses are making a point of tying themselves to organizations and charities. Fashion is so powerful in their ability to raise awareness, so they can help organizations get a better profile, which is what they’re doing today.”

“As a business, we get involved in a number of charities and initiatives around the world, but our umbrella cause is women and families and children,” Loehnis said. “The work that the hospital had been doing really resonated with us, and we thought if there was some way that we could contribute and get involved we would love to.”

Net-a-porter became a title sponsor of the lunch three years ago and runs a shopping initiative leading up to the event each year. A portion of the sales from the initiative go to charity.

“Today’s so fantastic, being in this venue, being surrounded by all these amazing women from so many different industries and worlds,” Loehnis continued.

As for her fashion plans? “It will start with Tom Ford tonight.”

If You Have Any Spare Time, Here’s Where to Chill Between Fashion Week Shows