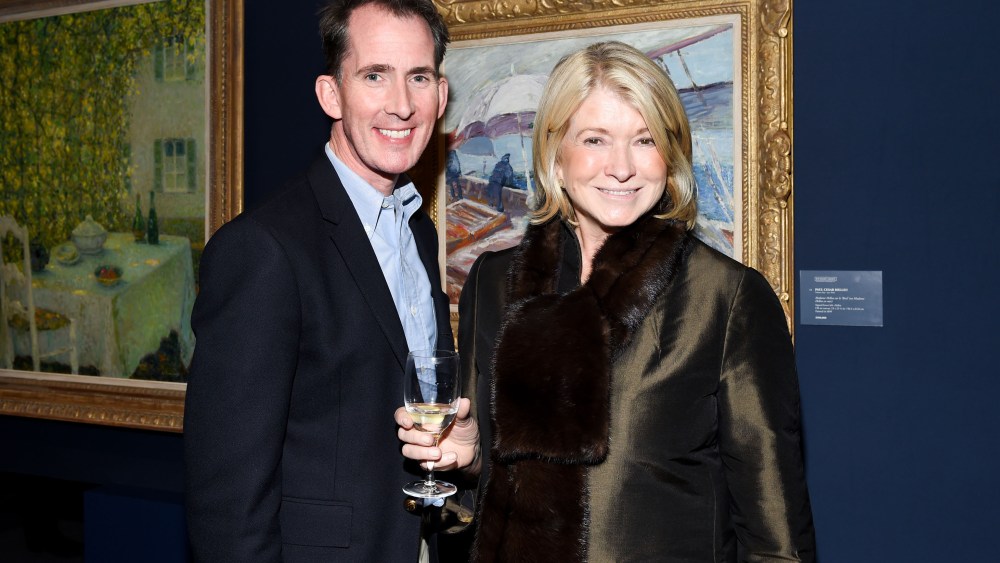 “We make [the dealers] tell us everything about everything,” added Stewart. “You talk to someone who really knows what’s going on. We’ve just learned it’s the 300th anniversary of [the birth of cabinetmaker Thomas] Chippendale coming up next year — I love Chippendale.”

Jamee Gregory, the newly appointed president of the Society of MSK, held court at the fair’s entrance in a cocktail dress by Oscar de la Renta. “You saw the beautiful flowers, which they flew in from Holland,” noted Gregory with a smile as she turned her gaze to a massive column of white blossoms suspended from the armory’s towering ceiling. “A lot of our supports don’t get to Maastricht [Netherlands], so Maastricht is coming to them.”

For nearly 30 years, the preeminent art and antiques fair has been based in the northern European city, with the New York iteration featuring works pre-dating 1920 on display for sale through November 1.

“Everybody is back in the city and ready to see each other and these beautiful things,” continued Gregory. “How terrific it is to support MSK and our patient care and research. When people are kind enough to support your charity, I want them to know how much it matters to me so I shake their hand and thank them.”

Gregory momentarily stopped her train of thought to display her hostess prowess. “Hi Shelly, thank you,” she exclaimed, without skipping a beat. Pivoting back, she added, “What could be a more exciting initiative? We’re nipping cancer in the bud.”

Accessories designer Rebecca de Ravenel, who had her eye on a work by painter Egon Schiele, noted how the party guests’ finery even rivaled the fair’s exquisite pieces. “Someone told me to just come after work and I didn’t know [how dressed up everyone would be] — I would have worn a little makeup,” said de Ravenel with a laugh. “I don’t live here so I’m seeing many friends I haven’t seen in a long time. It’s a melting pot of the arts and fashion [community] with the most beautiful paintings I’ve ever seen.”

Ross was joined by wife Hillary Geary Ross, who is a perennial supporter of MSK’s events. “It’s a wonderful hospital that does so much good,” she noted. “The whole [event] is very well-organized.”

That calm order was momentarily replaced by frenzy in one of the fair’s wood-floored galleries when a woman’s glass bead necklace came undone beside a grouping of 14th-century Spanish ceramics atop spindly pedestals. The panic-stricken room had assumed the worst, but then quickly — and comically — began chasing runaway beads cascading towards a parade of unwitting attendees. “‘The Benny Hill Show’ theme song should be playing,” remarked a tickled onlooker.

The benefit evening, which was sponsored by Spanish skin-care company Natura Bissé, appealed to both seasoned art lovers as well as new collectors. “They’re doing a lot to make this fun,” said young philanthropist Amory McAndrew. “From the flowers to the oyster shuckers, there’s a really great energy. [TEFAF and MSK] have reinvigorated this very nicely.”