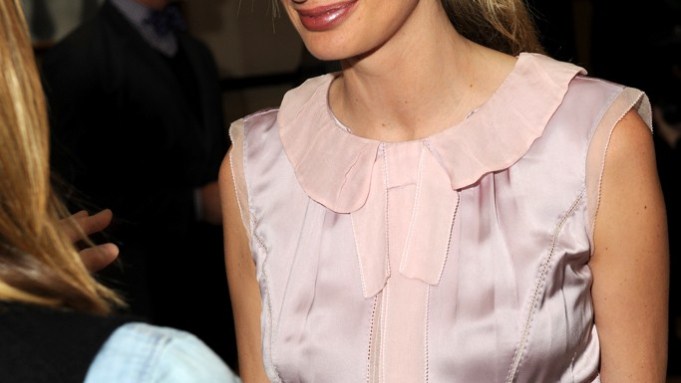 “Of course it’s on the shoe floor,” one primly dressed woman said to another, exiting the elevator on the eighth floor of Saks Fifth Avenue on Tuesday afternoon. “Tunnel vision, tunnel vision,” the other cracked as the pair traversed a sea of Lanvin patent pumps, Giuseppe Zanotti sparklers and McQueen skull-emblazoned slippers to arrive at their destination — Café SFA, where The Society of Memorial Sloan-Kettering Cancer Center held its annual associates luncheon.

Do-gooders that made the trek safe and purchase-free — including Arriana Boardman, Charlotte Ronson, Allison Aston and Maria Giulia Maramotti — corralled around the marble wraparound bar, nibbling on crab cakes and snatching up various carbonated libations from passed trays. “I’m such a huge supporter of Memorial Sloan-Kettering,” Ivanka Trump said, siphoning off some of her Bellini. “You can’t not be. They just do such good work,” she said, before turning to greet a late-arriving Lauren Santo Domingo.

The occasion raised funds for the hospital’s Pediatric Family Housing Endowment, which underwrites overnight visits for patients’ families. “A lot of us are moms and you never know if you’ll be in that position,” committee chair Shoshanna Gruss said shortly before taking her lunch seat. “We’re just this big group of women who feel very strongly about being able to help these children. And we’re all Saks shoppers.”

The all-female crowd entered the dining area en masse and discussed the impending fashion week. “Working on the collection has made the pregnancy go by so much faster,” designer and (nine-months pregnant) MSKCC chairman Veronica Swanson Beard said after plopping down in her chair. She and tablemate, sister-in-law and design partner Veronica Miele Beard are presenting their fall collection Wednesday afternoon. “It’s going to be good to be done,” Swanson Beard continued, though it wasn’t clear if she was referring to her collection or her pregnancy.

Suzy Johnson, Saks’ store manager, gave her opening remarks as diners grazed their bed of mesclun greens. “I know many of you had to walk or taxi or car the extra 10 blocks out of your neighborhood to come all the way downtown,” Johnson said, letting the sarcasm hang. “But I’m so, so happy to have you all come to what I think is the most beautiful store in the world.”