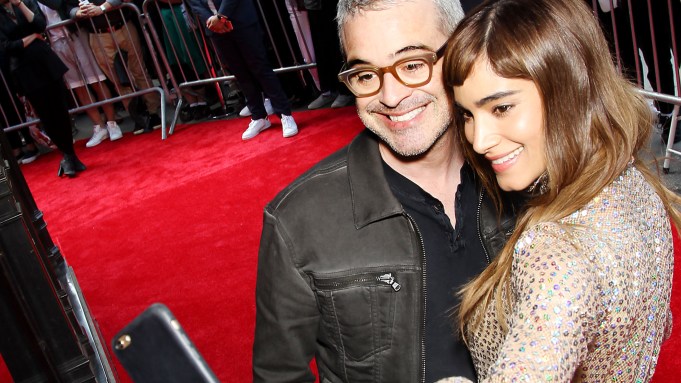 It is difficult to believe that Sofia Boutella could ever play a monster, because she is anything but frightening.

The actress was holding court on the terrace at Saks Fifth Avenue on Wednesday evening, helping the retailer celebrate its “The Mummy” inspired window display. Boutella – the mummy, herself – walked the red carpet in a taupe sequin, floor-length Rodarte gown, golden stilettos and pink-tinted sunglasses. Upon being told that she is becoming quite the fashion icon, Boutella let out a humbling, “Really?”

The actress has been working with stylist Karla Welch, and she praised the celebrity stylist’s “amazing eye.” Boutella’s recent film premiere looks — she’s worn dresses from Valentino, Miu Miu, Prada, Prabal Gurung and Marni — definitely confirm that. “I had a great time putting all those looks together,” Boutella said. “It’s like playing dress-up!”

“The Mummy” is a remake of Karl Freund’s 1932 film of the same name. In the film, Boutella plays the Pharaoh’s daughter who was buried alive, unable to succeed her father’s throne after he had a son. “She’s been heartbroken by the person that is supposed to love her the most – her father,” explained Boutella. “Her internal motivation is to get justice and get what she was always promised to become.”

Boutella said that Ahmanet, the mummy, is quite the strong female that just won’t take “no” for an answer.

During an intense moment in the movie, Boutella licks her costar Tom Cruise. According to the young actress, the scene was not originally part of the script — director Alex Kurtzman made a spontaneous decision to add it in as a comedic breather. Was licking Tom Cruise as appealing as it sounds? “Yes,” she said. “We should have done more takes of that!”

Boutella added that Cruise has been quite the mentor and inspiration: “He reminded me that anything you do, if you love it truly, you should be excited about it, and you should be loving it every time like it’s the first time.”